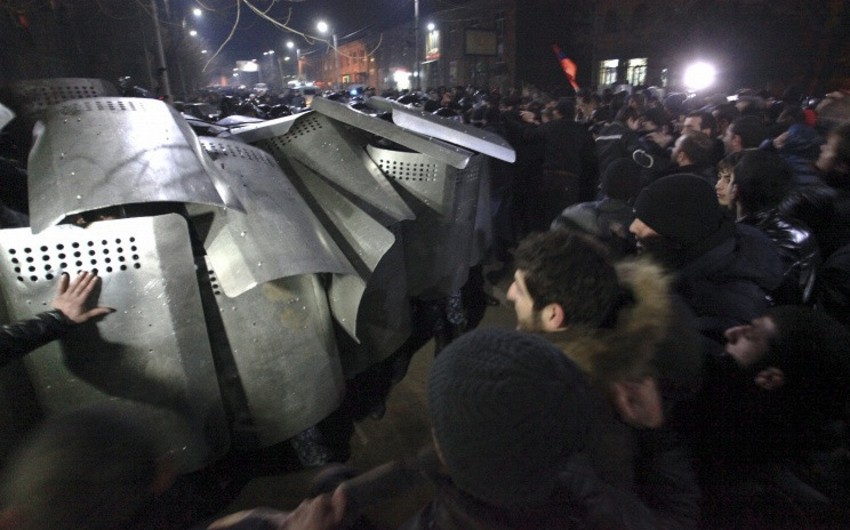 Baku. 23 June. REPORT.AZ/ People have been holding protests from 19th to June 22 in Yerevan and other major cities due to a rise of electricity tariffs.

This morning the police pushed the protesters out using batons and water cannons.

What factors influence the emergence of social and other problems in Armenia? Or why do this country always face problems with energy?

Events, which occurred in recent years, proved that Armenia is completely dependent on Russia, outside assistance or the Diaspora.

As a rule, the political and economic dependences cause serious problems in the country.

In other words, when the factors that affect the country are strong, then Armenia gets stronger, otherwise, it gets into a situation similar to the present one.

Electric Networks of Armenia does not belong to it. It is owned by the Russian company "Inter RAO EES", which does not want to sell the electricity at the current price. Therefore, the company puts forward a new, government-approved rates.

Thus, the rise in price of electricity in Armenia is implemented in accordance with the desire of the Russian company.

This is also confirmed by the anti-Russian slogans yelled during the protest.

The situation was very tense, the protesters even called numerous peacekeeping bases which exist in Armenia as invaders.

Protesters, went out the streets were holding signs saying "We are Armenians and we are owners of the country".

People required to reduce tariffs, nationalize enterprises controlled by Russians and withdraw Russian troops from the territory of Armenia.

The current Armenian electricity networks are controlled by Russian companies. Electricity prices in Armenia have increased for 3 times over past 2.5 years.

Obviously, the Armenian government does not control the gas supply too. This field is supervise by Gazprom Russian state company. In 1997, the official Yerevan and Gazprom shared system of natural gas in three parts.

Consequently, they passed under Russia's control. Currently, the system of natural gas in Armenia is controlled by the local company of Gazprom - Gazprom Armenia.

Recently the officials said that the Iranian-Armenian gas pipeline "Meghri-Gadzharan" will be sold to the Russian company Gazprom Armenia.

- It does not have its own economy and the country is governed from abroad;

- Sanctions imposed against Russia have negatively affected all spheres of life in Armenia;

- Due to the occupation of Azerbaijani territories by Armenia, Armenia remained aloof from regional projects, which created serious economic problems for this country;

- The country called Armenia is a fiction, and it is unable to make decisions.

Last campaigns pushed out by police give ground to assume that they are connected not only with the rise in price for electricity.

Current events confirm that Armenians will continue to try to build the Armenian state on the present territory.