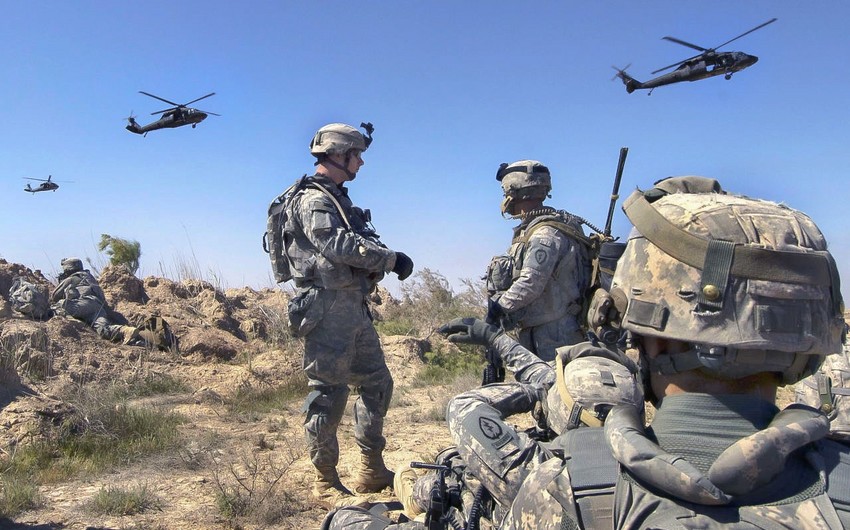 Baku. 21 December. REPORT.AZ/ Although American decision to withdraw from Syria has been welcomed, it has caused some mysteries. President Donald Trump has signed a decree on withdrawal of US troops and military hardware from the country due to the completion of the fight against the ISIS. From that day, the Americans began to carry military hardware towards Iraq. Trump said he has been campaigning on getting out of Syria for years, and six months ago. The US military is even expected to withdraw from Syria within 60-100 days. Official representative of Pentagon, Rebecca Riberich stated that Washington was planning to continue air strikes against terrorists in this country until its withdrawal from Syria:"We will continue our artillery and aviation strikes to support our allies during presence of US troops."

In fact, this decision of Donald Trump has not been perceived unequivocally. Pentagon chief James Mattis said he would resign in February 2019. His announcement came a day after President Trump said he was withdrawing troops from Syria - a decision General Mattis is understood to oppose.

In his resignation letter, Gen Mattis strongly hinted at policy differences with Trump. He said: "Because you have the right to have a Secretary of Defense whose views are better aligned with yours on these and other subjects, I believe it is right for me to step down from my position," he wrote. He also appeared to point to differences on a number of other key issues, including Russia and Nato.

"My views on treating allies with respect and also being clear-eyed about both malign actors and strategic competitors are strongly held and informed by over four decades of immersion in these issues," Gen Mattis wrote.

Incidentally, on March 13, US Secretary of State Rex Tillerson resigned over the Middle East, especially for the disagreement with Donald Trump on the Syrian problem. Trump has evaluated his activity over 9 months and said: “Rex Tillerson, didn’t have the mental capacity needed. He was dumb as a rock and I couldn’t get rid of him fast enough”.

Meanwhile, US ally France said it would stay in Syria and fight against terrorism. However, French Minister of the Armed Forces Florence Parly said the decision of the US President is troubling. Turkish President Recep Tayyip Erdoğan stressed that the US must comply with the agreement.  NATO said they would closely monitor  the US decision to fight together with the allies against ISIS. Russian President Vladimir Putin said the presence of the US military in Syria was illegal, adding that Moscow and Washington have reached significant changes in the fight against terrorism and have dealt a serious blow to ISIS in Syria. Nevertheless, the Russian leader welcomed the decision to withdraw US troops from Syria. But in his speech, he was skeptical about US withdrawal from Syria. So it would be more appropriate to emphasize one issue here. Vladimir Putin said in March 2016 that Russia is completing its military operations in Syria launched on September 30, 2015: " “I believe that the task put before the defense ministry and Russian armed forces has, generally, been fulfilled.

Therefore, I'm instructing the Defense Minister to begin the withdrawal of our major military units from Syrian Arab Republic tomorrow (March 15, 2016 - SI)." In any case, it is difficult to say about the execution of this order after about three years since there is no control over Russia's withdrawal from Syria and no organization monitoring this process. Russia is still in Syria and supports Bashar al-Assad. Therefore, some questions arise about Donald Trump's decision. Will Washington withdraw all their military personnel from Syria? Is it not intended to prepare the ground for returning back then? Is it not a trap for Turkey, Iran and Russia?

As it is known, Iraq and Syria were Moscow oriented during the times of former USSR. Therefore, the US could not penetrate these two countries. Almost 70 years later, in the fall of 2015, the US military officially entered Syria under the name of fighting ISIS and began operations there. Thus, after three years, such a decision from US does not seem logical. A few days before the announcement of this decision, there was information that the country was aiming to train up to 40,000 local troops to fight ISIS, ensure stability, and help with diplomacy, Joint Chiefs Chairman Gen. Joseph Dunford said. It is expected that this figure will reach 70,000. US argues that these armed forces will ensure security of Syria. Therefore, American troops may remain in that unit. The presence of the United States in Syria can be regarded as a guarantee of security for Israel. Therefore, it is unlikely that American troops will completely abandon this country. Let’s assume that the US military left Syria. What will happen to more than 20 bases in this country? Probably US will refer to Syrian Democratic Forces. This means that Syria's future as a state will be questioned. PKK / YPG-PYD seems to have been protesting Donald Tramp's decision. They threatened the United States by releasing up to 3,200 members of ISIS. It turns out that PKK has its own ISIS. Or the US may use YPG-PYD's adventure to return to the region.

In any case, the terrorists in Syria whether it is ISIS or PKK threaten Turkey's territorial integrity. Official Ankara has launched an antiterrorist operation in Syria to prevent this danger. Turkey will launch a new antiterrorism operation to clear eastern Euphrates River from PKK. In this regard Turkey asked the United States to withdraw its YPG-PYD couple from that area. Otherwise, it said it would clear the region of terrorists. However, Americans say they have begun to withdraw their troops from the north-east of Syria, rather than clearing the PKK from the east of the Euphrates. Is not this a new trap against Turkish servicemen?! Donald Tramp said that Russia, Iran, Syria (Bashar al-Assad's regime) and others are considered to be the regional enemies of ISIS and they must also fight against this terrorist group. It can be concluded, however, that by removing their troops US puts terrorist ISIS, face to face with Russia, Iran, Syria and Turkey. So, in the summer of this year, officials of Iran, Russia and the US claimed that there was no ISIS in Syria, but no explanation was given to where they disappeared. Therefore, it is possible to assume that a trap was created for countries involved in operations in Syria.

This multifaceted "machine" can also keep those who oppose US policy in the region busy.

Finally, on December 21, the Donald Trump administration reported the possibility of significantly reducing the number of US military contingents in Afghanistan. According to the information, the withdrawal of some American troops from Afghanistan may take several weeks. The United States has been in Afghanistan since 1979 in various forms, names, projects. It has reduced the number of servicemen, but has not withdrawn from there completely. So powerful states do not leave countries under their influence so easily. The US has not reached its goals in Syria. Bashar al-Assad's regime controls part of the country, and the US allowed the ISIS militants to remain under the control of PKK. Thus, the country has not been cleaned from ISIS and so on. The work is left unfinished. Such a situation will not bring respect to US. If we believe that it is not another game, then we can assume that the new US will emerge. However, US president’s motto “Make America Great Again” does not match this. That's why nobody goes out of place. Everyone is in their place. Nobody has left the labyrinth of the Near and Middle East.

The restart of the game, the process repositioning have begun.