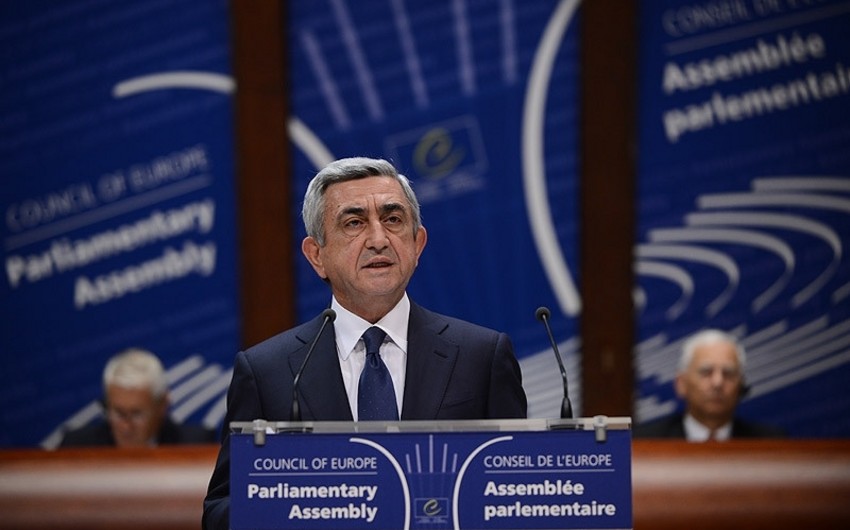 Baku. 26 January. REPORT.AZ/ The speech of Armenian president Serzh Sargsyan at Parliamentary Assembly of the Council of Europe (PACE) once again revealed the inner nature of Armenians. Of course, what one person has said and done cannot be applied to whole ethnicity. Unfortunately, his speech in the winter session of PACE on January 24, suggests such a conclusion. There are multiple facts that can prove it. We’ll try to respond to Serzh Sargsyan’s speech in the session with pro-Armenian logic.

Armenian president who couldn’t answer the fair questions of Azerbaijani delegation, resorted to blackmailing and lie. He said he didn’t participate in Nagorno-Karabakh events as a ‘military serviceman’. His falsification started since that time. According to Constitution, only Armenian president can become president of this country. While being Azerbaijani citizen he holds high position in Armenia. In 1993-1995, he was defense minister of Armenia, 1995-1996 minister of national security, 1996-1999 minister of internal affairs, 2000-2007 again defense minister, 2007-2008 prime minister and president of Armenia since 2008. His term in office comes to an end in April. Serzh Sargsyan want to be prime-minister of new government to be formed in accordance with new constitution of Armenia. As the Azerbaijani citizen from 1989 to 1993 he led an illegal “self-defense forces committee” of separatists. Khojaly genocide was committed on February 26, 1992 and apart from Serzh Sargsyan, personnel of the infantry guards regiment No 366 of former Soviet Union participated in that crime. Due to his anti-Azerbaijan position they later rewarded him by taking to Armenia. Because Russia uses Armenians in Nagorno-Karabakh as human resources for Armenia. After the behavior of the first president of Armenia, Levon Ter-Petrosyan born in Syrian city of Halab, Russia continues its activity in this direction. In fact, the saying “the liar does not have a good memory” proves itself once again on the case of Armenian politicians.

Serzh Sargsyan, who forgets his life journey denied the atrocities committed under his leadership forgetting about what he has said to British journalist Thomas de Vaala on Khojaly genocide and “Exo Moskva” radio station in his interview on January 24,2011. He told British journalist about the atrocities he has committed in Khojaly: “Before Khojalu, the Azerbaijanis thought that they were joking with us, they thought that the Armenians were people who could not raise their hand against the civilian population. We needed to put a stop to all that. And that’s what happened…”

Thomas de Vaala has written about that in his book “Black Garden”.

The then-president of Azerbaijan Ayaz Mutallibov could have distorted the realities about Khojaly massacre as he was fulfilling Moscow’s tasks that made Serzh Sargsyan the president of Armenia.

Meanwhile, during his speech at PACE winter session, Serzh Sargsyan said by making falsification against UN Security Council: “UN Security Council adopted four resolutions in 1992 on suspension of military operations in Nagorno-Karabakh.” But those resolutions were adopted not in 1992, but in 1993. It shows how Serzh Sargsyan distort the facts. It also shows that Armenian president is still not informed about content of those resolutions. It gives the reason to maintain that they received instruction to keep Nagorno-Karabakh under occupation. For this reason, international documents have no significance for Armenian authorities and political leaders. When they receive an order to withdraw from occupied territories, they will immediately start to fulfill it.

“Demands the immediate cessation of all hostilities and hostile acts with a view to establishing a durable ceasefire regime, as well as immediate withdrawal of all occupying forces from the Kelbadjar district and other recently occupied areas of Azerbaijan,” said in that document.

Resolution 853 was adopted on July 29, 1993. The document stressed that Nagorno-Karabakh is Azerbaijani territory. The resolution condemns the occupation of Agdam district and other areas of Azerbaijan Republic.

It demands the immediate cessation of all hostilities and the immediate complete and unconditional withdrawal of the occupying forces involved from the district of Agdam and all other recently occupied areas of the Azerbaijan Republic.

Resolution 874 was adopted on October 14, 1993. It also demands the withdrawal of Armenia from the occupied territories of Azerbaijan. Resolution 853 adopted on November 12, 1993 also stressed the withdrawal from occupied territories. The given facts exposed the falsification of Armenian president Serzh Sargsyan and his aggressor country. He has threatened the territorial integrity of Azerbaijan from PACE tribune: “Returning Nagorno-Karabakh to Azerbaijan is impossible.”

As you know one of the aims of Council is to make Europe stronger. But Sargsyan’s speech questions the establishment of such Europe. Because the Council does not allow any speech supporting separatism in Europe. But Serzh Sargsyan makes such false speeches relying on its supporters.

Armenian president came to PACE session after meeting with French president Emmanuel Macron in Paris. Following the meeting, Emmanuel Macron said France is ready to contribute to settlement of the Karabakh conflict together with Russia and the US: “I know advocating for peace is quite hard and I wish those meetings to bring concrete results. France remains committed in contributing to the settlement process along with its American and Russian partners.”

But Serzh Sargsyan’s speech at PACE suggests that different discussions than Macron wishes are held. It’s necessary to mention what Serzh Sargsyan said in the meeting with Armenian diaspora representatives in Switzerland after the meeting with Azerbaijani President Ilham Aliyev, October 16. “The only solution acceptable for us is that Karabakh be outside Azerbaijan…”

Following the meeting with Emmanuel Macron, the aforementioned liar and aggressor addressed the PACE session. Actually, we don’t wish to end our article in such a way. But his speech makes it necessary to tell you, what famous people said about ethnic group to which Serzh Sargsyan belongs.

Famous German traveler Alfred Körte wrote in his book “Anatolian Landscapes” devoted to German public figure in Turkey: “When you deal with Turks it’s sufficient to have a verbal agreement there is no need to sign agreement… If you want to deal with Greek, sign contract for sure. If you decide to work with Armenian, there is no need to have documentation. You will simply face slander. It’s dangerous to come across with Armenian. Seeing him in a dream is not good for anyone...”

Prominent Iranian poet Sadi Shirazi said about Armenians: “Armenian is the snake of the world, is an enemy of the humanity.”

Famous Russian poet, humorist and satirist Alexei Mikhaylovich Jemchujnikov describes them as: “It’s the disease of this nation to scream when they speak. They may engage other nations to scream in their favor and spread false information.”

The aim for paying attention to these examples is not insulting any ethnic group. Simply, Serzh Sargsyan’s attitude to international documents, aggressive behavior falsification made us to mention that. Serzh Sargsyan’s behavior still suggests that they didn’t change yet.