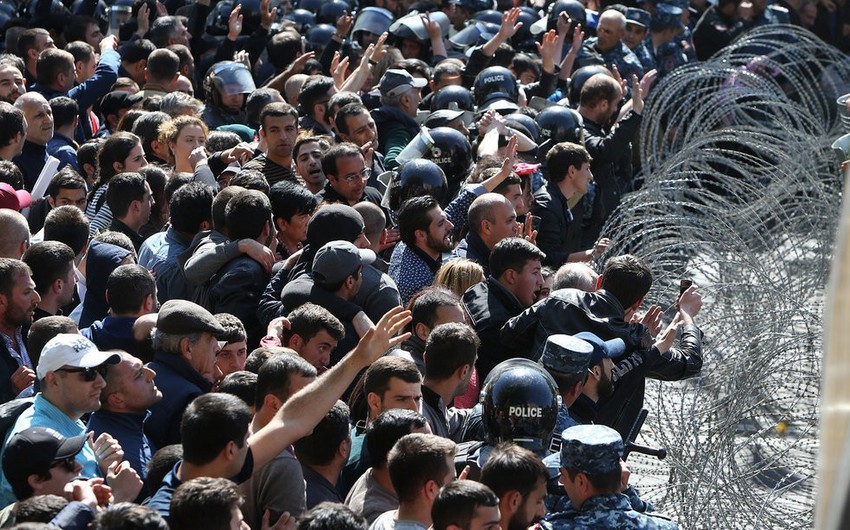 Baku. 5 November. REPORT.AZ/ The "revolutionary reforms" in Armenia after the change of power in May this year continue. This process can be said to be a "revolution" as the government is likely to recover in quantitative and qualitative terms.

It is clear that each process has its own “expiry date”. In other words, it is postponed for completion. Similar to the expiration date of food products. Otherwise, as the product can poison the organism, the failure of the process will damage the state and society.

There is a lot of damage even when the revolutions do not end and they last forever. When revolutions fail, they promote new revolutions. The socialist revolution that took place in Russia 101 years ago came to an end after 70 years. Both the Russian Empire collapsed and this idea was removed from the political scene.

Antimonarchy revolution in Iran in February 1979 has not yet completed. Because their ideas have not come true. The property passed from one to another and the religious-political trend dominated.

In the past 15 years, "velvet", " rose " and "orange" revolutions took place in former Soviet republics. As a result, Georgia entered a new phase and Ukraine is still in confusing situation. Although the Kyrgyz Republic has repeatedly denied the process, the process has not yet ended, and the country is trying to maintain balance between the west and the north.

These revolutions can also be perceived as the result of external influences. For example, 3 Arab states in northern Africa - Egypt, Libya and Tunisia experienced similar political-military processes like "domino effect". The result is still not heartwarming. Developments in these countries were also called revolution.

A similar incident happened in Armenia. Former President and Prime Minister Serzh Sargsyan and his supporters were removed from the political arena, replacing them with new ones. New arrivals have begun to investigate March 2008 events. Over these incidents, former President Robert Kocharyan was first arrested and then released.

The investigation is underway and he is prohibited to leave the country. The files on the crimes committed during Serzh Sargsyan's term are collected. Detained members of the armed group, such as Sasna Tserner are released.

Conditions are created for them to participate in parliamentary elections.

The parliament, formed during Serzh Sargsyan's term, was dissolved on November 1. Armenian Prime Minister Nikol Pashinyan resigned on October 16. According to the laws of the country, if parliament fails to elect a prime minister two times, the parliament has to be dissolved. The first election was held on October 24. Thus, the Armenian parliament was dissolved since the elections did not take place this time. On November 1, Armenian President Armen Sarkissian signed a decree on appointing extraordinary elections to the legislature. Dissolution of the Parliament can also be considered as success of Pashinyan's supporters. Has revolution of Pashinyan's 'My Step' Bloc ended? Or when can this process be completed? The key factor in recent processes in Armenia was a December referendum on constitutional reform in December 2015. At that time, Kocharyan's successor called the decision to change the constitution on the initiative of Serzh Sargsyan a "big mistake" for "extremely dangerous" consequences for the country: "Today, there is no need for constitutional reform and radical change in itself."

Sargsyan's forerunner believes that the problems facing the country can be resolved within the framework of the existing constitution and no one puts doubt on the functioning of the Basic Law. Kocharyan stood against this reform from the very beginning.

The "No!" Movement, which unites about 20 public and political forces in Armenia, urges voters to vote against the draft constitution in a referendum, saying that the change aims at extending the duration of Sargsyan’s rule. Despite objections, a referendum on the constitution was held, a new fundamental law was adopted.

Notably, after the independence, Armenia's first constitution was adopted in 1995 and in 2005 it was changed. Ten years later a new basic law was adopted. However, after the events, the new constitution also says there is a need for reform. A working group of lawyers was established at the initiative of Armenian President Armen Sarkissian.

They have already begun to work on the constitutional amendments. According to the information, the Working Group is working on a new constitution. The date for the referendum on the basic law is still unknown. So, one of the stages of the end of the revolution is the constitutional reform. The last Parliament did not adopt the new Election Code. International organizations also condemned this. Therefore, the adoption of the new Election Code is also part of the revolutionary process.

Investing in Armenia is at zero level. The new government, which will be formed after the parliamentary elections, will try to overcome this miserable situation. At present Armenian businessmen living in Russia do not invest in Armenia. Russian companies are also leaving the country.

Even Polymetal, which purchased the gold mine in the Qafan district in 2016, decided to leave Armenia. The problem with Alaverdi copper plant has not been resolved yet. Nikol Pashinyan says the plant's activities are dangerous for human life, but the other party does not agree with it. These two facts are an indication of the state of the non-ferrous metallurgy industry, which constitutes an important part of the country's economy. The Russian Federal Veterinary and Phytosanitary Supervision Service ("Rosselkhoznadzor") has imposed temporary restrictions on imports of some Armenian goods to Russia in connection with violations of sanitary and veterinary requirements of the Eurasian Economic Union. The probability of prolongation or toughening of such sanctions is still high.

New political forces claim that most of the real estate in the country has been achieved during the rule of corrupt government of Kochi and Sargis. Thus, key factors to finish Nikol Pashinyan revolution depend on property issue, economic reform and cooperation with Russia.

One of the slogans of Pashinyan is anti-corruption. A few days ago, 19 employees of the State Revenue Committee of Armenia were charged with bribery. Initial investigative actions have been completed in relation to these individuals, and the charges and other materials have been sent to the prosecutor's office. Hence, one of the main tasks of the revolution is to continue the fight against corruption. One of the issues that officials in Armenia have acknowledged is the problem of human rights protection. Pashinyan declared that conditions in penitentiary facilities in the country are in an outrageous state. Therefore, it is no exception that there is a need for a revolutionary reform of human rights in the country.

One of the most serious problems in the country is the issue of demography. As of October 1, 2018 the population of Armenia was 2,969,200 people. The number of people dropped by 10,400 people during the corresponding period of 2018 compared to October 2017. In January-September 2018, the number of newborn babies in the country decreased by 4.2 percent to 26,483 compared to the same period last year. This area remains a problem in Armenia.

As is known, Armenians, like a tumbleweed, kick around the world. Throughout the history, Armenians served the sultans, kings, and then without a twinge of conscience betrayed them for their own selfish goals. All these historical facts have long been confirmed. To stop the outflow of population from the country, it is important to solve the economic, political and social problems in the country. Here is another criterion for completing the revolution.

The main task facing the future government of Armenia is to regulate relations with Russia and the United States.

Official Yerevan's willingness to purchase weapons from US can be a headache, because it will be regarded by the Kremlin as a betrayal.

One of the conditions for the finalization of the revolution is the withdrawal of Armenian troops from the occupied lands of Azerbaijan. Nikol Pashinyan’s recent visit to occupied Karabakh proves once again that the creation, presence and future of Armenia as a country depends on . Continued occupation of Azerbaijani lands, territorial claims to the neighbors pose threat to the very existence of the Armenian state.

Thus, the main condition for the completion of the revolution is the withdrawal of Armenian troops from the occupied territories of Azerbaijan, since the future of Armenia is inextricably linked with the country's commitment to the principles of good neighborliness.

Those who were pleased with the revolution seemed to be in a hurry. Revolution in Armenia cannot be considered as completed unless the aforementioned and unsaid issues find their solution. Otherwise, new and even more radical events are not ruled out. The armed attack on the Armenian parliament, Sasna tsrer's armed assault on the police station and the March 2008 events give a ground to say this.