Referendum Act: Improvement of Public Administration - ANALYSIS Provisions will be put to a referendum are in line with international standards
151 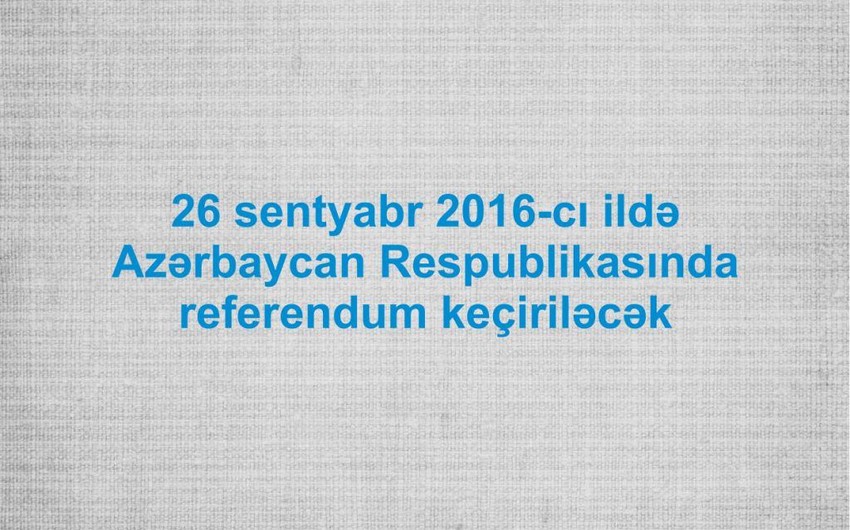 The proposals on amendments to the Constitution of the Republic of Azerbaijan will be put to a referendum.

The proposals on amendments to the Constitution are of progressive nature and meet the contemporary requirements and comply with the interests of the society. The proposals are mainly made in two directions: Strengthening protection of human rights and freedoms and improvement of the State governance.

The Analytical Group of the Legal Analysis and Research Public Union analyzed these amendments and made the following conclusions:

It is stated in the part I of the Article 9 of the present Constitution that, in order to provide its safety and defend itself the Azerbaijan Republic establishes Military forces and other military troops.

However, amendment to this article about the Azerbaijan Army being a part of the Military Forces fully reveals the essence of the Article and removes the existing gap. Thus, it is stated in the proposed new edition of the part I of the Article 9 that:

The fundamental human and civil rights and freedoms

Special attention is paid to human rights issues in the proposed draft Referendum Act. Several important amendments to the existing provisions on human rights have been proposed. It was proposed to add the expression “Human dignity is protected and it is respected.”to the Article 24 of the Constitution. At the same time, an important addition regarding inadmissibility of abuse of the rights was made to the Article.

The innovation proposed for the Constitution regarding the Right for Equality, which is an important element of Human Rights is related to the various categories of population. It is proposed to replace the word “nationality” with the word “ethnicity” in the first sentence and the word “national” with the word “ethnic” in the second sentence. If this proposal will be supported during Referendum, then the Article 25 will sound as follows. Besides, the following sentence is added to this article:

In the Convention on Elimination of All Forms of Racial Discrimination to which Azerbaijan is party the term "racial discrimination" shall mean any distinction, exclusion, restriction or preference based on race, colour, descent, or national or ethnic origin which has the purpose or effect of nullifying or impairing the recognition, enjoyment or exercise, on an equal footing, of human rights and fundamental freedoms in the political, economic, social, cultural or any other field of public life.

As we can see, replacement of the word nationality with the word ethnicity in the Constitution is not occasional and complies with the Convention.

As you know, in the recent times, a range of progressive changes related to the property right have been made to the local legislative acts. However, there is already a need for making such changes in the Constitution. Particularly, the issue of the property right complying with the principles of social justice is reflected in the proposed amendments. It is proposed to add the following sentences to the Article 29 of the Constitution:

According to the Article 1 of the Protocol 1 to the European Convention for the Protection of Human Rights and Fundamental Freedoms to which Azerbaijan Republic is party “Every natural or legal person is entitled to the peaceful enjoyment of his possessions.”

“The preceding provisions shall not, however, in any way impair the right of a State to enforce such laws as it deems necessary to control the use of property in accordance with the general interest or to secure the payment of taxes or other contributions or penalties.”

As we can see, although the proposed changes to the Constitution regarding Property right are of limiting nature, they fully comply with the European Convention on Human Rights.

One more amendment regarding human rights is related to the right to personal immunity. Thus, the proposed changes provide for even more strengthening the immunity rights of the individuals. With the purpose of strengthening protection of the personal information, it is proposed to add the following standards to the Article 32 of the Constitution:

“Except for the cases stipulated by law, it is not allowed to intervene in the information resources in the electronic media and paper in order to obtain information about third parties.

Information technologies will not be used for the disclosure of information about private life, including those related to beliefs, religion and ethnicity, with the exception of the personal consent of the person to whom the information relates, as well as statistical processing of the anonymous nature of these and other cases prescribed by law.

The terms of the personal data, the conditions of their processing, gathering, transmission, use and protection are determined by law.”

The right to protection of the personal information is provided in the Article 8 of the European Convention. Thus, according to this Article, Everyone has the right to respect for his private and family life, his home and his correspondence. According to the part 2 of the Article, these rights may be limited. Thus, There shall be no interference by a public authority with the exercise of this right except such as is in accordance with the law and is necessary in a democratic society in the interests of national security, public safety or the economic wellbeing of the country, for the prevention of disorder or crime, for the protection of health or morals, or for the protection of the rights and freedoms of others.

The last amendment proposed regarding the Human Rights is in the Article 36 (Right to Strike) about prohibition of lockout, except of the cases provided by the legislation.

In general, the Labor Code of the Azerbaijan Republic regulates the issue of lockout.

Lockout — When a labor dispute begins, if the employer is incapable of meeting the demands of the striking employees on production, economic or financial ground, such a strike shall be deemed without basis and illegally motivated in order to infringe on the rights and interests of the employer, and a lockout may be declared to shut down the entity. However, taking into account that the rights of the employees may be violated when the lockout is applied against the employees, stipulation of the provision related to lockout in the Constitution will contribute to more effective protection of the human rights and freedoms.

According to the recommendations No 92 adopted by the International Labor Organization on June 29, 1951, if a dispute has been submitted to conciliation procedure with the consent of all the parties concerned, the latter should be encouraged to abstain from strikes and lockouts while conciliation is in progress. As we can see, the proposed amendments comply with the recommendations of the International Labor Organization and offer to abstain from practicing the lockout.

Limiting amendment to the article 59 of the Constitution related to the right for joining is planned. Thus, it is proposed that the first sentence of the article would be as follows:

“Activity of unions intended for forcible overthrow of legal state power on the whole territory of the Azerbaijan Republic or on a part thereof, pursuing other goals, which considered a crime or the unions using the criminal methods are prohibited

Although, this amendment provides for certain limitation of the right for joining as we already mentioned above, this provision is fully compatible with the European Convention on Human Rights. Thus, although the Article 11 of the Convention provides opportunity to the people to widely realize their right to assembly, the part 2 of the article is about limitations on the use of the right to assembly and association. It is stated there that, No restrictions shall be placed on the exercise of these rights other than such as are prescribed by law and are necessary in a democratic society in the interests of national security or public safety, for the prevention of disorder or crime, for the protection of health or morals or for the protection of the rights and freedoms of others.

Besides, proposal of the Article 60 of the Constitution in the draft Referendum Act in the following edition is aimed at improvement of the citizens’ rights protection mechanisms:

“Article 60. Administrative and judicial guarantee of rights and freedoms

I. Administrative and judicialprotection of the rights and freedoms of everybody is ensured.

II. Everyone has right to have unbiased approach to his/her case and consideration of the case in the administrative and court proceeding in a reasonable time.

III. Everyone has the right to be heard in administrative proceedings and court proceedings.

IV. Everyone may appeal in administrative procedure or to the law court regarding activity and inactivity of the state bodies, political parties, legal entities, municipalities, and officials.”.

The amendments proposed to the Article 68 of the Constitution are aimed at protection of the citizens from and prevention arbitrariness of the representatives of the state bodies in relation to them. Thus, the following changes to the article are proposed:

“To provide the title of the Article 68 in the following edition:

“The right to protection from arbitrariness and conscientious conduct”;

15.2. the part I and II to be considered the part II and III respectively;

“I. Everyone has right to a conscientious conduct by the state bodies excluding the arbitrariness.”;

The changes regarding age qualification are as follows:

According to the amendment provided in the Referendum Act, it is proposed to add the Article 98 with the following content:

The term of presidency

According to the proposal, it is planned to replace the figure “5” with “7” in the part I of the article 101 and add the second sentence as follows:

“Article 103. The vice-presidents of the Azerbaijan Republic

In the 1st sentence of the part I to replace “within three months” with “during the period of 60 days” and in the second sentence replace “prime minister” with “first vice-president”;

The part III should be provided in the following edition:

The part IV should be added in the following edition:

The Analytical Group of the Legal Analysis and Research Public UnionSpecifically for Report Information agency.