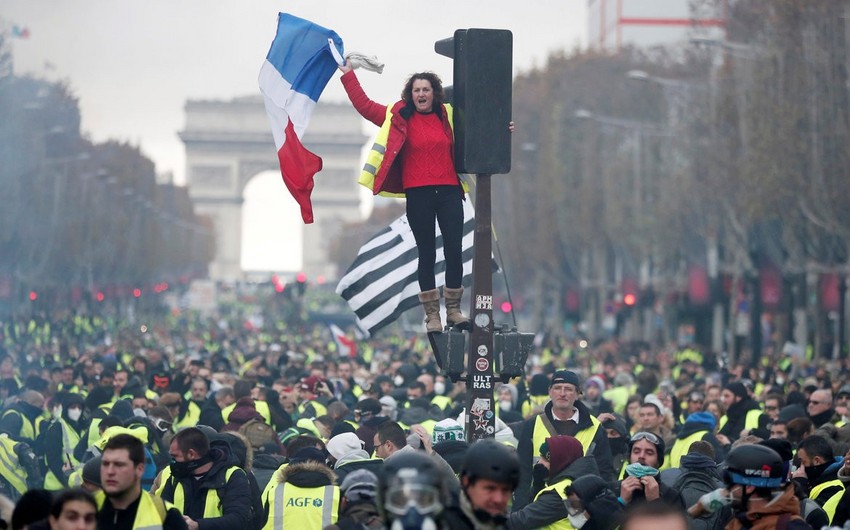 Baku. 4 December. REPORT.AZ/ What is happening in the states taking over the mediation mission in resolving the occupied conflict is also of interest to the public. From this point of view, the attitude of the authorities to the events taking place in OSCE Minsk Group co-chairing countries' (US, France and Russia) and solution of emerging problems is important. Even the position of the co-chairs over other conflicts is observed and monitored by Azerbaijan. The fairness of these states is also measured by the way they treat their citizens. Can a state that is unfair to its citizens take an objective position in the problem of another state, or in that case, resolving the Nagorno-Karabakh conflict? Solving the problem in their country can also be a sign of the strength of the co-chairs we have mentioned. Stopping the rally with the use of force does not mean that the country is strong. The power of these states is in both negotiation and peaceful resolution of conflicts within the country and abroad. Otherwise, it creates disappointment.

Due to increase in the tax on gasoline by 2.9% and diesel by 6.5% from January 1, 2019 the "yellow vest" protests started in France from November 17. Authorities claim that this step is being taken against air pollution. The state-regulated price of gasoline AI-95 in France is currently 1.47 euros, AI-98 is 1.54 euros, diesel sells for 1.48 euros. The prices will increase by 1.9 euros from January 1 next year. The damage caused by protests in Paris on December 1 was more than 3 million euros, according to preliminary estimates. French Economy and Finance Minister Bruno Le Maire said the demonstrators had a serious impact on the country's economy. France's Interior Ministry said 136,000 people were involved in protests in the country on December 2. The opposition, meanwhile, planned to form a rally with five million people. At least 3 people were killed and 1,043 people (222 law enforcement officers) injured and 1424 demonstrators were detained.

Demonstrations also covered other layers of the country. On December 3, healthcare workers, more than 100 high school students and teachers, as well as in the regions joined protesters. Notably, all participants of the rally are supported by all political parties and embassies.  Heads of the country's leading political parties have accused the authorities of violating the rights of protest participants. According to opinion polls in France, 80 percent of respondents support 'Yellow vest' protests.  French far-right party leader Marine Le Pen has proposed the suspension of the strike and dissolution of parliament. He emphasized that the citizens of France demand fair tax at the expense of the citizens. He emphasized that French citizens are required to be fair in tax issues. In Germany, Belgium and the Netherlands, marches and rallies have been held to support the action in France. This shows that the scale, the social layer of the protest increases with more participants involved. French President Emmanuel Macrone has urged the government to discuss the situation with the leaders of political parties represented in the parliament. In addition, the head of state has had a dinner with police officers.

He said he will reward public security officers who carried out their duties on December 1 in the areas where the protest took place.

Whether it is democratic or not, in any case, it is claimed that there is external intervention in France.

This country also has its own Éminence grise. One of them is said to be a Bernard-Henri Lévy - French politician, journalist and philosopher. He is considered a socialist. At present he defends the French government. He defended the Muslims in Bosnia, supported the bombing of former Yugoslavia and the Kosovo Liberation Front. He also defended the fight against terrorism in Afghanistan. B.H. Lévy is considered to be the one who fights against Islamic fundamentalism. He visited Georgia during the war in August 2008 and then interviewed the then-President Mikheil Saakashvili. At the same time, he supported the Arab revolutions in northern Africa. He is one of the ideologists of color revolutions. He opposes Bashar al-Assad's regime in Syria. He wrote an article entitled "We are all Ukrainians" in the Le Monde newspaper, supporting the Maidan movement in Ukraine. In 2014, he urged European athletes to boycott Winter Olympic Games in Russia.

Thus, the Le-Parisien newspaper supports actions in France, providing protesters with yellow vest and food. This edition is owned by France and Europe's richest man, Bernard Arnault. His rivals call Arnault "wolf in sheep's clothing". He earned $ 81 billion with a stiff fight. It is said that France's counter-intelligence has links to Arnault and the intelligence has been reporting on his rivals. It is even claimed that the Rothschild family played an important role in electing President Emmanuel Macron in the 2016 presidential election. According to the information from 2016, Arnault did not openly fight against Macron in 2017 who was supported by Rothschilds. These actions give rise to the fact that a colour revolution is born and that will change the country. In other words it looks like Bernard Arnault wants to lead the country to the "yellow" revolution. The protesters are not against the tax policy of the government, but the resignation of the government and they shout slogans against President Emmanuel Macron. This is one of the most interesting moments. Bernard-Henri Lévy opposes "yellows" in his country, while supporting color revolutions around the world.

In fact, the “yellow vest” movement started with the petition collection by French women on October 12 against gasoline price increase. Then the rally grew. Le Parisen published petitions against price hikes. In social networks, the events were watched by 4-6 million people. Strikes are currently underway. French Prime Minister Édouard Philippe said he would not meet with protesters. He said the plan for the new tax payment would be declared at a meeting with representatives of political parties represented in the parliament. But in France, large-scale protests are being held with social demands. In this country, there is a constant struggle for the ideals of social justice. In the summer of 2016, the French people protested against a new controversial labor code. This document includes items such as bringing maximum working day up to 12 hours from 10, dismissing those wishing to change a labor contract, and paying less wages. After the Senate adopted the bill, the text was submitted to the parliament again. At that time, Francois Hollande was the president and Emmanuel Macron was the minister of economy.

Thus, according to the news published in connection with the activities of the Éminence grise and the demands put forward, France is on the edge of "color revolution". It is also clear that the rally is not only against price hikes. It can also be regarded as the fight of two billionaires Bernards, the action against the Rothschilds. So it is possible to assume that the "yellow" movement can change France. Otherwise, the protests can rise again. Because when revolution does not hit the target, it starts anew.