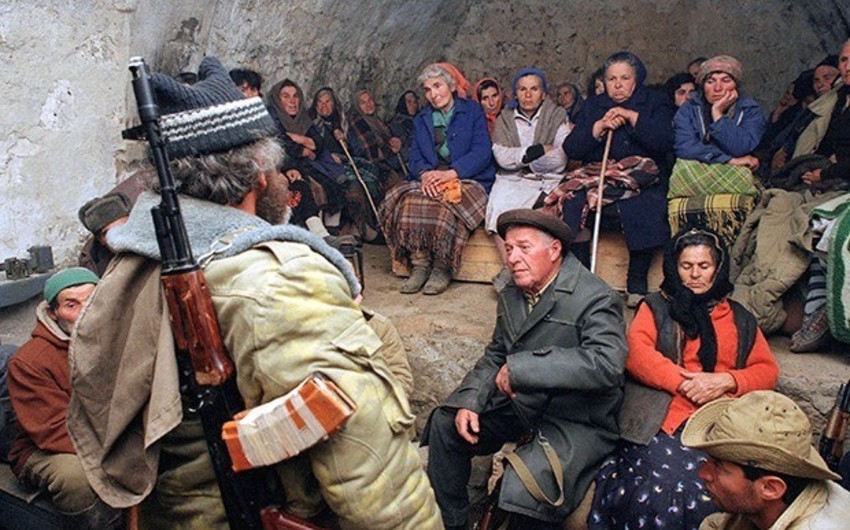 In order to save the country, it is important for Armenia to continue the occupation of region and surrounding 7 districts of Azerbaijan. The Armenian community in Nagorno-Karabakh is the hostage of the Armenian government. So official Yerevan treats Armenians in Karabakh as terrorist.They keep them in captivity and collect funds from the US, European countries and Russia. In the last few months this is more apparent.

The Russian press has recently written that Armenian Prime Minister Nikol Pashinyan refused to finance the separatist regime in Nagorno-Karabakh. The reason for this is the change of personnel in the system created by separatists. It is reported that official Yerevan does not provide separatists with financial assistance for already two months. The reason is that separatists do not want to obey Pashinyan. It is supposed that the violation of ceasefire from their side causes pressure on the Armenian leader.

In the past, the heads of the separatist regimes, Arkadi Gukasyan then and Bako Sahakyan now obeyed former president Robert Kocharyan. They used to fulfill  Kocharyan's order. However, today Bako and his group disobey Armenia. One of the reasons is Pashinyan's attempt to change the current heads of separatists. Notably, last year and early this year Armenians in the occupied Khankendi city held a protest action against Sahakyan and his gang. Pashinyan called on the members of the Armenian community in Karabakh to take to the streets to protest against Bako.

The recent confrontation between the Pashinyan and Sahakyan grew tougher. The Armenian prime minister claims that the separatist regime will also have access to documents on the negotiation process on the Nagorno-Karabakh conflict settlement.

According to him, until now the authorities in Armenia did not give any information to Armenians in Karabakh. Pashinyan said Saakyan disseminated confidential talk between them: "He writes on Facebook that Pashinyan sells lands. However, when Serzh Sargsyan, his dear friend, was in power no one ever considered Sahakyan. They did not think it was important to inform him about the negotiation process. Apparently, domestic and foreign policy in Armenia is based on the Armenian community in Karabakh. This community is a tool for Armenia to feed, live, exist, and a tool of pressure in the hands of international and regional forces. Nikol Pashinyan by stopping financial support for the separatists and forcing Sahakyan to quit as ringleader also expresses his objection to Russia.

As it is known, the Kremlin does not rely on the new power in Armenia. Over the past two weeks, Russian President Vladimir Putin met with Nikol Pashinyan at Nur-Sultan and St. Petersburg meetings for only 30 minutes. By the way, Russia's Foreign Ministry spokesperson Maria Zakharova characterized tension in the Moscow-Yerevan relations on the Facebook page: "A decision must be taken on all matters based on each other's interests. Pashinyan said at St. Petersburg forum: "No one is happy with the situation but we should make everyone happy." After this note he was asked to comment on what he wrote. The spokesperson said that concession is the only way out of the situation: "We need to work on concessions. There is a need for mutual respect in order to achieve a compromise."

As Vladimir Putin said, it is necessary to understand each other's interests, and respect these interests”. It is possible to conclude that Kremlin does not respect Pashinyan because his government still do not understand Russia's interests. From this point of view, Yerevan and Moscow use the Armenian community in Karabakh and its former representative, Robert Kocharyan.

Russian ambassador to Azerbaijan Mikhail Bocharnikov and his counterpart in Yerevan Sergei Kopyrkin commented on the settlement of the Nagorno-Karabakh conflict at the press conferences held in Baku and Yerevan. "Russia stands for the peaceful settlement of the Nagorno-Karabakh conflict and welcomes the continuation of the negotiation process," Bocharnikov said.

Kopyrkin said: "It is not right to say that the settlement of the Karabakh conflict depends only on Russia." It should be noted here that Moscow played a key role in stopping the April battles in 2016. The ambassadors' speech conveyed the message that not only Russia is responsible for delay in settlement of the Nagorno-Karabakh conflict but others as well. Because the fact of occupation and aggression is linked to his name. It has become a toy of Russia in this role. However, the events show that the government of Nikol Pashinyan does not fit this role. The attempts to get close to the Russia also affect the confidence of the west. It is possible to conclude that the official Armenia with financial and other pressure on Armenian community tries to benefit the European countries and the US at the same time.

Armenian government just like its predecessors, exhibited Armenian community in Karabakh for sale.

Notably, Sahakyan, the head of the separatist regime, recently met with the Armenian branch of the Eurnekian Group Jorge Del Aguila Eurnekian. The head office of this company is located in Argentina. It looks like Sahakyan wants to get the financial support of the Armenian diaspora abroad. However, Pashinyan and Sahakyan cannot understand the truth: All roads to Khankendi pass through Azerbaijan. If they understand it and accept it, they will not depend on external forces.Then the Armenian community in Karabakh will not become hostage of the Pashinyans, Kocharyans, Sargsyans, Sahakyans and more “yans” in the region.