OSCE Ministerial Council Meeting: successes and failures The problem of Nagorno-Karabakh conflict remained in the shadows at the meeting
1429 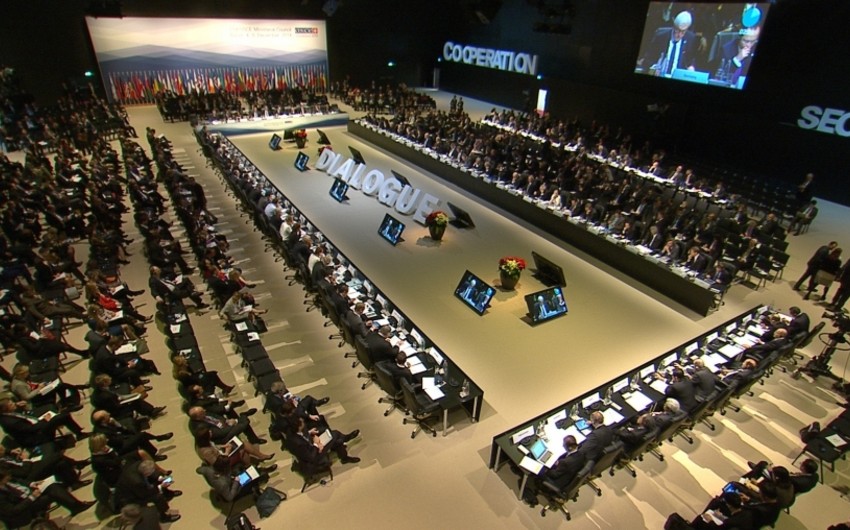 Baku. 6 December. REPORT.AZ/ The annual meeting of the OSCE Ministerial Council wrapped up on December 6 in Bazel, Switzerland. During the meeting the ministers of  57-members of organization and partner countries have summed up the year, which was  not easy in terms of international politics.

Number of decisions, including the prevention of anti-Semitism and the observance of gender equality were adopted during the OSCE Ministerial Council in Bazel.  Switzerland as OSCE   chairman in 2014, initiated the creation of the the Panel of Eminent Persons, which should be tackled making recommendations on responses to security challenges.

OSCE Foreign Ministers decided that in 2016, the organization will be headed by Germany, in 2017 - by Austria.

However, participants of the meeting did not succeed to accept the document on the main topic of discussion - Ukraine.

OSCE Chairman-in-office Didier Burkhalter noted with regret that the parties were unable to adopt a final document "because of differences in determining the causes of the conflict." This in principle was expected, considering that all  decisionsin OSCE need to be adopted by consensus.

The main part of the meeting was devoted to the conflict in Ukraine. Ministers of   OSCE countries and the partner countries expressed concern  over the situation in the country, including a security threat endanger the entire organization. OSCE Secretary General Lamberto Zannier after the meeting said that "this year became one of the most difficult in the entire history of the OSCE".

Thereby the problem of Nagorno-Karabakh conflict remains in the shadows. Of course, the issue of the unresolved conflict was raised during the speech by Minister of Foreign Affairs of Azerbaijan E. Mammadyarov.

The Heads of Delegation of the OSCE Minsk Group countries  limited with only habitual joint statement in which they called on the parties to escape the escalation of the conflict and to begin work on a comprehensive peace agreement. By the way, Azerbaijan has repeatedly stated its willingness to move in this direction.

Even a formal meeting of foreign ministers of Azerbaijan and Armenia was not held in the framework of Ministerial Council  in Basel. OSCE Minsk Group could organise just a separate meeting with the ministers.

On January 1, the OSCE chairmanship will pass from Switzerland to Serbia. Alas, the mediation experience of Switzerland could not help in resolving the existing protracted conflicts in the region. Moreover, in 2014 the number of conflicts in the OSCE area increased. It is hoped that Serbia, which has similar problems with the territorial integrity of its country will be more successful as next OSCE chair country in this regard.