Nikol Pashinyan's Khankendi show - continuing game - COMMENT The meetings, discussions and negotiations related to Azerbaijan's occupied Karabakh region recently constituted the basis of political agenda. In fact, the occupation of lands remain the number one issue on the agenda of Azerbaijan's social, political and cultural life. The activeness of international mediators, even their repeated statements with definite proposals related to the conflict settlement raise some hope for the liberation of lands from occupation.
117 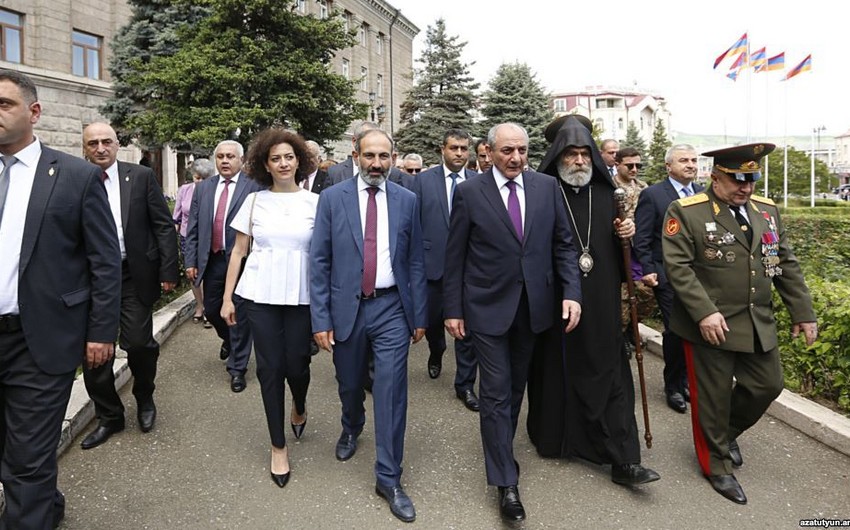 The meetings, discussions and negotiations related to Azerbaijan's occupied Karabakh region recently constituted the basis of political agenda. In fact, the occupation of lands remain the number one issue on the agenda of Azerbaijan's social, political and cultural life. The activeness of international mediators, even their repeated statements with definite proposals related to the conflict settlement raise some hope for the liberation of lands from occupation.

But what happens after a definite statement is voiced? As a country whose lands are under occupation, Azerbaijan seeks to strengthen its military might among other priorities. To this end, the Azerbaijani army started large-scale drills that continued from March 11 until March 15. The drills involved up 10,000 military personnel, up to 500 tanks and other armored vehicles, up to 300 missiles and artillery systems of different caliber, multiple launch rocket systems, and mortars, up to 20 army and front-line aviation for various purposes. During the exercise the troops fulfill tasks on preparing for the offensive, striking the imaginary enemy from several directions, destroying its defense and groupings, as well as hitting its military and strategic points in the deep areas of the enemy’s territory with missiles and artillery.

Meanwhile, on March 12, Prime Minister Nikol Pashinyan held an extraordinary session with members of the Armenian Security Council in Khankendi, the occupied city of Azerbaijan. Calling Pashinyan’s Khankendi visit ‘a working’ one, the spokesman did not provide any information about the Council’s agenda. The information was provided only after the meeting was completed. It came out that Pashinyan held the Council’s meeting in Karabakh for two goals: to discuss the statement of the Minsk group co-chairs with the Armenian community of Nagorno-Karabakh and to send the ‘don’t be afraid’ message to the Armenian public in connection with Azerbaijan’s military drills. Pashinyan also seeks to present the new authorities as those willing to resolve the Karabakh conflict and not wanting to preserve the status quo. The current state of the Armenian army, death of Armenian soldiers and military in Karabakh in various circumstances create serious problems for the current authorities to implement the economic program prepared in the country.

Therefore, Pashinyan held a gathering under the name of a session of the Security Council together with the heads of the Armenian community in Karabakh to respond to the co-chairs’ proposals. Since Karabakh issue and withdrawal from occupied lands is of vital importance for Armenia, it could hold the gathering only under such a name. It is a reality that by doing so Pashinyan tramps the norms of international law through violating Azerbaijan’s territorial integrity. Armenian public and experts believe that by this step Pashinyan puts the responsibility on the Armenian community of Karabakh. Though Pashinyan calls these reflections ‘absurd’, it is no secret that Armenia already has no power to keep the lands under occupation. Pashinyan noted that Armenian government and himself, as a Prime Minister who won the trust of the Armenian people, will take consequent steps in this direction: “This issue will remain one of the points we discuss with the President of Azerbaijan and the OSCE Minsk Group co-chairs.” In fact, by saying so he also announced the agenda to be discussed at the upcoming meeting.

Spokesperson of Azerbaijan’s Foreign Ministry Leyla Abdullayeva commented on Pashinyan’s meeting in Khankendi: “Territorial integrity of Azerbaijan within its internationally recognized borders cannot be a subject of discussions in any form.” She added that if Pashinyan holds a session in occupied Khankendi, it means that there is no need to attract Armenians living in Azerbaijan’s Nagorno-Karabakh region to negotiations: “The Prime Minister, who voiced the thought of ‘Karabakh Armenianism’, ends the game of words, and calls the Armenians living in Nagorno-Karabakh not the ‘people’ but the Armenian community.”

In fact, Nikol Pashinyan’s Khankendi visit and his meeting there suggest that by doing so official Yerevan signals to the co-chairs that it follows their proposals. Or they try to signal to the international meiators that this issue is rather related to the Armenian community of Karabakh. But other developments give a ground to say that official Yerevan do not make decisions alone. On March 12, Pashinyan’s spokesperson Vladimir Karapetyan met with Russian President Vladimir Putin’s Aide Dmitriy Peskov as part of his working visit to Moscow. They discussed the exchange of experience in information, holding regular consultations for strengthening of ties, as well as covering events on issues between Armenia and Russia and strengthening of cooperation. Notably, Karapetyan is considered Armenian former president Levon Ter-Petrosyan’s supporter. If we believe that the visit was not accidental, we can say that following the co-chairs’ statement, Karapetyan brought a message to the Kremlin regarding the steps that official Yerevan may take. This may also be Ter-Petrosyan’s message to Moscow, because earlier there were some reports that the former president had mediated the normalization of Pashinyan’s relations with Moscow.

By the way, another force is also on hold in Armenia. This is another former president Serzh Sargsyan. On March 5, he visited the occupied Karabakh region of Azerbaijan and met with head of the separatist regime Bako Saakyan and others. As to the Armenian media, he is waiting for the aforementioned gathering to end to identify the future plans. In general, he is reported to be in regular contacts with the Armenian community of Karabakh after he was ousted from power. Sargsyan may have stayed in Karabakh and waited for the completion of the gathering in order to achieve the thaw in relations with the Russian President and act in a role of an alternative source of information for Vladimir Putin, because Russia still has doubts regarding the role of the then government of Armenia in implementation of the prearranged scenario of the April 2018 events. Armenian media writes that for almost a year the previous government has been trying to persuade the Russian partners of being not guilty and having not assisted the process of Pashinyan’s coming to power. By the information, Russian President Vladimir Putin expressed his discontent with Sargsyan: “He said that Sargsyan had to call him and inform him before his resignation for the sake of their long-lasting friendship and for ethical reasons.”

Finally, the known statement of the co-chairs can also be assessed as Kremlin’s position, because Russia is one of the co-chairs. In this sense, Pashinyan cannot refuse from the plan envisaged in the statement. Meanwhile, Sargsyan is making use of the situation in an attempt to attract Kremlin’s attention. But his train is seemingly off. And Pashinyan is facing a dilemma: either to withdraw Armenian troops from the occupied lands of Azerbaijan and go into history as the political figure who settled the historic conflict, or to prolong the lifespan of his government by preserving the status quo. In all cases, like he himself claims, Armenian people gave him the mandate for the settlement of problems. Anyway, he continues the West-Russia game by creating the image of Yerevan’s main player related to Karabakh.
Subscribe to our Facebook page