Monument to Armenian fascist in Russia - Krasnodar is not Armenia - COMMENT

Monument to Armenian fascist in Russia - Krasnodar is not Armenia - COMMENT Would Russia allow erecting a monument to Jonas Noreika in Leningrad or Kaliningrad?
125 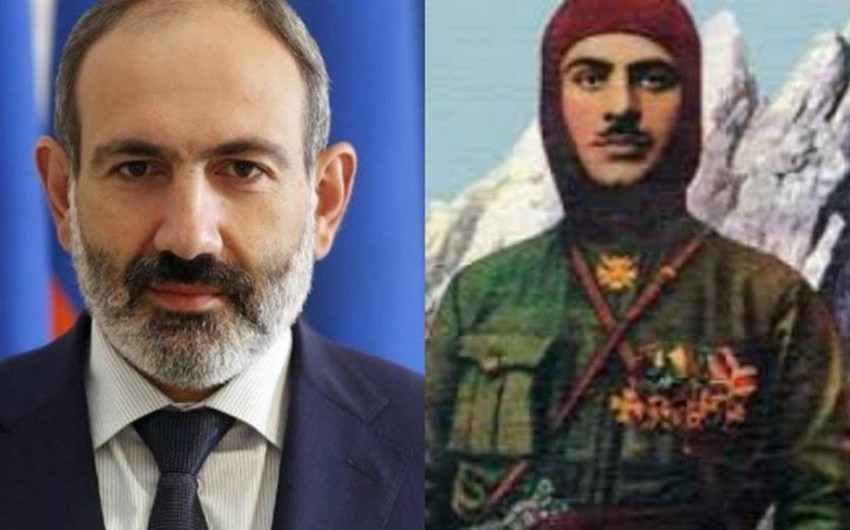 Would Russia allow erecting a monument to Jonas Noreika in Leningrad or Kaliningrad?

Unfortunately, the national ideologists of the Armenian ethnic group are bringing up a society that suspects everyone, claims that everything starts with them and considers the great Turkish nation to be their enemy. The political and ideological system created years ago is now advocated among Armenians both in Armenia and beyond. While the world is getting closer and cooperating, the attempt to preserve and spread enmity among nations hinders regional cooperation and threatens security.

In fact, wise and well-bred people seek cooperation by combining what is profitable for their ethnic group and neighbors. But Armenia's current and former leaders are creating paranoia and doubts among their ethnic group by reminding them of the persons and events forgotten even by history. The erection of a monument to fascist Armenian Garegin Yegishevich Ter-Harutyunyan (Garegin Nzhde) in Yerevan in period of Armenia's former president and 30-day prime minister Serzh Sargsyan and popularization of this Nazi Armenian by current Prime Minister Nikol Pashinyan testify to what has been said above. It turns out that Armenia lacks any normal leader that would be accepted by the entire world and try to build positive relations with neighbors. Or all leaders of Armenians are infected with the incurable enmity to Turks. Armenian leaders are bringing up a new generation infecting it with this sick idea. As a result, they create a threat to regional and international security. It would be enough to recall that ASALA terrorist organization belongs to this very ethnicity.

In general, Nikol Pashinyan and his associates are constantly presenting the supporter of fascist Germany as 'the statesman'. It even came to the point that Pashinyan equalized Nzhde to one of the heroes of the Great Patriotic War, Marshal of the Soviet Union, USSR Hero Ivan Bagramyan. The Armenian Prime Minister claims that they 'both fought for Armenia'. How can they call it a struggle for Armenia? One fought for Hitler Germany and the other for the Soviet Union. Nzhde was Hitler's associate, while Bagramyan fought on the side of Stalin, the head of the country that struggled against fascism. It can be called 'Pashinyan's logic' or what else can be expected from Nzhde's followers? Regretfully, the one who has such a contraversial vision, is heading the Armenian ethnic group.

And who is Nzhde? The article headlined 'Military counterspying activity in the last period of war' published in Volume VI called 'The secret fight in the years of Great Patriotic war, reconnaisance and counter-reconnaisance' of the 12-volume encyclopedia 'Great Patriotic War of 1941-1945' published by the head editorial staff of the under the chairmanship of Russian Defense Minister Sergei Shoigu, reads: "Within the agent activity related to the 114th Dromedar obergroup, counterspies have exposed and arrested migrant Ter-Harutyunyan, a.k.a Nzhde, the former general of the Dashnak army, who spied for Germans. In the years of the Great Patriotic War, he involved over 30 spies of Armenian descent in the territory of Bulgaria and participated in preparing provocations and throwing them into the rear of the Red Army for them to carry undermining activities. 17 saboteurs of the SMERSH group were detained while the rest were declared wanted. Nzhde also took part in perpetuation of the Holocaust against the Jewish population of Europe. In 1942, he arranged the Armenian legion fighting against the Soviet Union."

Notably, the monument to fascist Nzhde was erected in Yerevan in July 2016. At that time, spokesperson of the Russian Foreign Ministry Mariya Zakharova expressed Moscow's surprize: "Everyone knows our attitude to any manifestation and glorification of Nazism, fascism, neo-nazism and extremism in any form. Our attitude was also reflected in international documents. The reason of erecting this monument is unclear for us, too." On May 9 of this year the Russian Foreign Ministry also made a statement regarding the growing tendency towards fascism in Armenia. The Ministry published its report "On the situation related to glorification of Nazism, neo-Nazism and other practices that contribute to fuelling contemporary forms of racism, racial discrimination, xenophobia and related intolerance". In its report, the Russian Foreign Ministry announced that glorification of Nazism, racial discrimination, neo-nazism, xenophobia and other intolerance are the factors that create tensions. The document analyzes the political and social state in more than 40 countries including Armenia. The report especially highlights the moment related to Armenia. It is noted in the document, that the former ruling Republican Party of Armenia took steps to perpetuate the memory of Armenian fascist Garegin Nzhde, who cooperated with the Third Reich. The report reads that by perpetrating the memory of the one that cooperated with fascist Germany, the former leadership of Armenia promoted the strengthening of fascist tendencies. The document especially notes 'Sasna Tsrer' which dreams of creating 'Great Armenia' (this party is considered the party of Armenian Nazis and is an armed grouping which attacked the police office in 2016 - ed.). Commenting on the report of the Russian Foreign Ministry spread on May 9, Spokesperson of the Armenian Foreign Ministry Anna Nagdalyan said: "The monument to Garegin Nzhde, who cooperated with fascists and the Third Reich during the Second World War, was erected in period of Serzh Sargsyan's presidency and nationalist 'Sasna Tsrer' was registered as a political organization in autumn 2018." The statement uttered by Nagdalyan six months ago contradicts to Nikol Pashinyan's idea of Bagramyan-Nzhde couple. It turns out that not everyone in Armenian society and government treats history with Pashinyan's logic.

By the way, Rabbi Abraham Cooper, representing the Simon Wiesenthal Center, said at the summit of religious leaders held in Baku that there is anti-Semitism in Armenia. He condemned the erection of a monument to Nzhde, calling him the 'associate of fascism'. The head of the center is Rabbi Hier, who dedicated his life to combat against crimes of fascism and Holocaust. The document disseminated by the Russian foreign ministry says that there is no neo-nazism, racial discrimination and xenophobia in Azerbaijan: "Azerbaijani leadership ensures the coexistence and activity of representatives of different nationalities and religions in conditions of tolerance."

Representative of the Russian public, member of the Armavir City Duma of Krasnodar Alexei Vinogradov poured paint onto the memorial board to Nzhde. He noted that the local authorities promised to remove the board until November 11: "But they did not do it. Since the term expired, I decided to settle the issue myself." Vinogradov is a representative of an elected body. It means that his action was a social order. The fuss made by Armenian press and media around this issue is still unclear.

Finally, Russia reacted roughly to the perpetuation of the name of a person who had links to facists and was presented as a representative of a national liberty movement in any of the Baltic states. Though the comparison to Nzhde may seem flawed, but official Kremlin gave a strong reaction to the erection of a monument to Lithuanian associate of fascists Jonas Noreika in Vilnius. He is accused of killing Jews. Would Russia  allow erecting a monument to Jonas Noreika in Leningrad or Kaliningrad? Naturally, they won't. Then why did the Krasnodar authorities have such a positive attitude to Nzhde? How did that Armenian  contribute to the development and democratization of Russia? Or probably he contributed to the transformation of Russia into a modern state? Naturally, 'no' is the only answer to these questions. There are many representatives of Armenian ethnic group in the territory of Krasnodar. But it does not mean that this area belongs to Armenians. In other words, Krasnodar is a Russian territory. In this respect, if any desire of Armenians is fulfilled in this area, if even fascists are perpetuated here, it means that Moscow will face a serious threat in this area in terms of security and territorial integrity in the future. Naturally, there are those in Russia who play to Armenia's script.

At the summit in Ashghabat, President of Azerbaijan noted that heads of the CIS member-states who stand against glorification of fasism had repeatedly voiced statements in this regard: "We, the heads of state, repeatedly spoke against glorification of facists. Unfortunately, such cases are encountered in the CIS space, especially in Armenia. The former Armenian government erected a monument to Garegin Ter-Harutyunyan, a.k.a. Garegin Nzhde, a fascist executioner and betrayer, who served for German fascists, in the center of Yerevan. A large group of war veterans from the CIS countries repeatedly voiced protests against this impudent step taken by the former Armenian leadership."

In their final document adopted at the 18th Top Summit of the Non-Aligned Movement held in Baku on October 27, the heads of state and government condemned any form of glorification including the erection of memorials and monuments to members of the Nazi movement, neo-Nazism and Vaffen SS organization, conduction of any public demonstrations for glorification of Nazi past, Nazi actions and neo-Nazism, as well as presenting those who fought against the anti-Hitler coalition and participants of the Nazi movement as members of the national liberation movement.

The 75th anniversary of the Second World War will be marked on May 9, 2020. Russia is one of the parties that sustained the biggest loss and suffered most in this war. Will the memorial board to fascist associate Nzhde be preserved in Russia? Isn't the preservation of this monument in Yerevan an insult for the CIS residents who celebrate the completion of the Great Patriotic War? In any case, the commemoration of Armenian fascist and erecting a monument to it is a disrespect to those who survived the Second World War, those who died and victims of Holocaust.

Nzhde's main motto was: "No day can pass without fighting Turks." The one who considers the fight against any nation to be his main motto has the only name - fascist. On November 20, 1991, those who were brought up with the propaganda of Hitler associates and those, who protect them, downed helicopter Mi-8 N72 which was flying at a height of 300 meters over Garakand village of Khojavand region of Azerbaijan. 22 people died as a result.