Jerusalem knot: Trump's decision and OIC’s declaration can hardly untie it - COMMENT We will not talk about many known causes of this similarity
2309 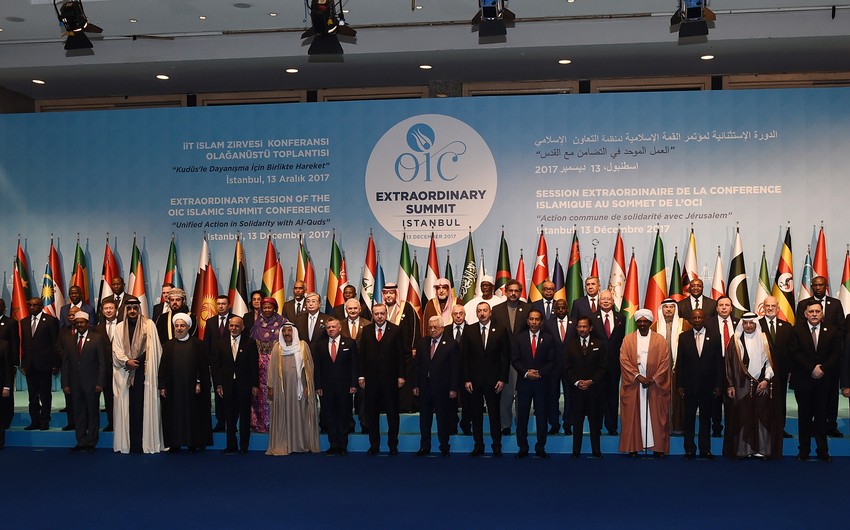 Baku. 15 December. REPORT.AZ/ In general, looking back at history is a sign of retrogression. Even though, it leads to nowhere, sometimes there is a need to turn over the pages of history.

Even in many cases history itself requires recalling, and what has happened in recent days in Jerusalem has also led us to return to history.

On December 6, US President Donald Trump has recognized Jerusalem as the capital of Israel and signed a decree to move the US Embassy from Tel Aviv to Jerusalem. In this regard on December 13, the Organization of Islamic Cooperation (OIC) held an extraordinary summit in Istanbul. It recalls a historic event foundation of which was laid 100 years ago. Thus, on November 2, 1917, former British foreign minister Arthur James Balfour, wrote a letter to a member of the House of Commons of Britain and politician Walter Rothschild, referring to the establishment of the Jewish state and their relocation to Palestine. This document is called "Balfour Declaration".

This year marks the 100th anniversary of this document. According to historical figures, in 1887, 3% of the Palestinian population was the Jewish people.

After the end of World War I, the Jews began to migrate to Palestine since 1918. A more rounded figure: 70 years ago, after the 1947 United Kingdom left Palestine, UN adopted Resolution 181.According to this document, project of creation of two states in this land was adopted.Over the past years, one of the states, Israel has been established and enlarged, and the Palestine diminished in size and now facing the threat of wiping out.

At the extraordinary summit in Istanbul, along with the Jerusalem problem, various conflicts around the world and the occupations have been discussed.At the meeting, President Ilham Aliyev spoke about both the Palestine and the Nagorno-Karabakh conflict: “We are deeply concerned about the decision of the U.S. President regarding the Jerusalem city which contradicts international law and UN Security Council resolutions.This decision would have a negative impact on the fair and comprehensive settlement of the Palestinian-Israeli conflict and could lead to serious frauds in the Middle East.We believe that the United States should reconsider this decision”.

During the meeting the head of state also pointed out the fact of the occupation of Nagorno-Karabakh and the surrounding regions:

"Nagorno-Karabakh is an ancient and historical land of Azerbaijan. As a result of the aggression of Armenia more than one million Azerbaijanis became refugees and internally displaced persons. The occupied territories were totally exposed to ethnic cleansing and were plundered. Armenia has destroyed all cultural monuments, including mosques and Islamic monuments. At the same time, Armenia wants to establish friendly relations with different Muslim countries. This is the greatest hypocrisy. World Muslims must know that Armenia that destroys our sacred mosques can not be the friend of Muslim countries”.

The final statement of the summit stressed that East Jerusalem was recognized as the capital of Palestine.

The unilateral decision by the United States to recognize Jerusalem as the capital of Israel has been regarded as a step supporting the policy of ethnic cleansing in the Palestinian lands including East Jerusalem occupied by official Tel Aviv in 1967. The Declaration also stressed that the decision was contrary to UN Security Council resolutions adopted in 1980 and 2016: "If the US administration does not abandon this decision, it will be responsible for all the painful consequences it will face”.

Palestinian President Mahmoud Abbas made a sharp speech at the meeting and it is reasonable:

"US President Donald Trump wants to present Jerusalem to Israel. He behaves like giving one of the U.S. states to Israel. Today, even Japan and the UK are not on the US side. Israel has not followed the UN resolutions on Palestine so far”.

Israeli prime minister Benjamin Netanyahu commented on the final document of extraordinary summit in Istanbul: “All these statements fail to impress us. The truth will win in the end and many countries will certainly recognize Jerusalem as the capital of Israel and also move their embassies. The Palestinians would do well to recognize reality and work toward peace, not extremism, and acknowledge an additional fact regarding Jerusalem," he said.

Though the comparison is not proper, we would like to mention that the statements of M.Abbas and B. Netanyahu, declaration of Organisation of Islamic Cooperation (OIC) echo the statements made on Nagorno Karabakh and adopted final documents. We would not detail the known reason of this similarity. Though the main topic of discussion if Jerusalem, Karabakh should not be forgotten as well. It is impossible to forget the truth that is known and admitted by the whole world.

Occupation of Karabag for 25 years is a result of a strange situation that lies already have long legs in the world. The activity of international mediators in the past years consisted of travelling, giving useless statements. The support shown to the aggressor is also one of the factors the situation did not change for a long time.

OIC has 57 members and five observer states. After UN, OIC is the largest international organization. The resolutions adopted by both organizations have not been implemented. I cannot move my tongue to tell that both organisations are useless. Because sometimes it plays a role to share the problems with and convey some realities to international community. The Extraordinary summit in Istanbul was attended by heads of 48 states, governments, foreign ministers and diplomatic representatives. Saudi Arabia and Egypt which are considered one of the active countries on settlement of Palestinian and Jerusalem conflict, were represented in the summit in the level of foreign ministers. It is obvious that Egyptian president Abdel Fattah el-Sisi has problems with official Ankara. But they could have used the situation to make peace. On the day of summit Israel’s Intelligence Minister Yisrael Katz said they recognize Saudi Arabia as a leader of Arab world and invited Saudi crown prince Mohammed bin Salman to visit Israel. It turns out that Trump knew the indifferent attitude of some leading Muslim countries on Palestinian and Jerusalem problem and made a decision in a confident way knowing that he will not face serious resistance.

In general, it is not the first time when Muslim countries deal with enemies of others behind each other’s back. Azerbaijani society possesses multiple facts about the support provided to Armenia for keeping Nagorno Karabakh under occupation. Comprehensive cooperation of Islamic Republic of Iran with aggressor Armenia proves that. The “Şərq” (East) and other newspapers that were recently published in Tehran distributed the interview of Masis Mayilian, “foreign minister” of separatists in Karabakh. The interview features about the “border between Iran and Karabakh”. For such behaviors the position of Iranian officials on Palestinian issue does not seem so sincere. This is only one example from the relations of Muslim states to each other. Even one of the main reasons that Palestinian conflict had not been resolved so far can be considered with aforementioned factor. Why Donald Trump made this decision now? Or why the document approved 22 years ago by Congress he signed now? This decision is inconsistent with the current situation in the Near East. That is why the aforementioned questions can be answered as following:

- Donald Trump and his administration knows the attitude and power of Muslim states to this issue;

- US prepares in Near East for the period when conflicts in Iraq and Syria will be resolved;

- Donald Trump was convinced that Israeli issue can be resolved amid the current disorder;

- Trump said in the meeting of Jewish lobby on March, 2016: “We will move the US embassy to Jerusalem, the eternal capital of Jewish nation.”

- Muslim states were not ready that Trump will keep his promise mentioned above;

- Trump paid back $ 20 million given for Trump’s election campaign.

The New York Times wrote that Sheldon Adelson casino chain transferred $ 20 million for election campaign of Donald Trump and $1.5 million to the account of Republican Party. Donald Trump is a businessman and billionaire. It can be suggested that he fond of money and power. Therefore, it can be suggested that US president along with Republican Party sold Jerusalem for $ 21.5 million. It is necessary to take into account that businessman Donald Trump has defeated politician in presidential election.

Therefore, almost for a century USA has been one of the main powers in global policy, for the past 30 years it has been the sole power. The decision on Jerusalem is demonstration of this power. Nearly all the OIC member states are strategic allies of Israel and USA. They trade with them and in the same political and military bloc. Donald Trump knowing the power of alliance between Washington and Tel Aviv ignored those relations. With his decision he created problems for its Western allies. The decision of Trump on Jerusalem will not be implemented soon. But he will come down in history with this issue. The history will judge the rest. Other relations can be characterized with a phrase: “Time is the best teacher and judge.”