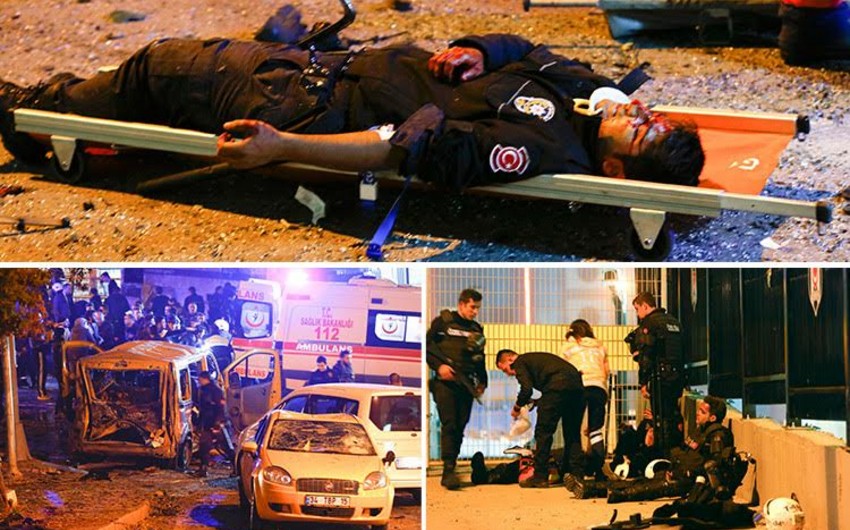 Baku. 13 December. REPORT.AZ/ Another terror attack in Istanbul, Turkey. 44 people killed, 155 injured in bombing in Beşiktaş district of the city on December 10.

36 policemen have been martyred. Terrorist group PKK (TAK- Freedom Hawks) has claimed responsibility for the attack.

Those who cannot transform Turkey into Libya, Iraq, Syria and Yemen, try to disrupt the peace in the country by means of PKK, its branches in Syria and Iraq, ISIS, DHKP-C (Revolutionary People's Liberation Party/Front), MKLP (Marxist-Leninist Communist Party), ASALA and other terrorist groups.

Below developments were underway in Turkey before terrorist attacks (If to take into account these organizations and those forces standing behind them, we can see that enemies of Turkey are the same):

Operations against PKK, its Syrian branches, ISIS were intensified;

Members of People’s Democracy Party (HDP) accused of supporting terrorists, who were ignoring calls of public prosecutor for inquiry, were arrested;

Official Ankara announced that they will open the doors for Iraqi and Syrian refugees to access European Union countries;

Bloody terrorist attack was committed in the country, where all above developments were proceeding. We can figure out that some visible and invisible forces intensify pressure on official Ankara. The interests of those forces coincide regarding PKK terrorist group and they widely use it.

Some claim that it is meaningless to seek the reasons of internal disorder abroad. But it is not a secret that those forces need controllable governments and states.

For example, Syria and Iraq are states established in lands of Ottoman Empire. Governments of these states formerly were supported by Soviet Union. After collapse of Soviet Union, Western political centers tried to convince governments of those states to take their side. Once they didn’t get positive answer, Syria and Iraq were dismantled with participation of ISIS and other terrorist groups.

The period after World War II was marked with process of collapse of colonies. As a result of this process, in the territories of former colonies, semi colonial governments, lacking stable internal and external policies, seeking shelter under wings of powerful political centers and making steps under foreign dictation, were established.

After collapse of Ottoman Empire, the same project was tried in Turkey. But Mustafa Kamal Ataturk and his associates thwarted this plan. After World War II they tried to weaken Turkey entangling it in civil conflicts. This process continues even today …

Terrorist groups offend Turkey for long years, kill civilians. Where do they get financial and technical support? Let’s bring to the attention some instances from Turkish press:

Attendants of rallies in Germany, England, France, Austria, Sweden, Finland, Netherlands and Denmark, supporting HDP, were carrying PKK banners, although it is recognized by EU countries and USA as terrorist group. How would those governments react, if people in mass rallies carried banners and chant slogans of Al-Qaida and ISIS? Of course those people would be punished properly. It cannot be regarded as right for mass protest. Because those symbols propagate terrorism. But for some reason this approach is not applied to PKK and those who carry their symbols and propagate them.

It so happens that many European countries support this terrorist group in this way.

Even during times of Soviet Union, which was a closed country, there were news about ASALA’s attacks on Turkish embassies in foreign countries and assassinations of diplomats. Is the situation different now? Absolutely not. In previous month French police showed his support to PKK supporters, not preventing their attack on Turkish embassy.

One taxi driver was fined by Austrian court, as he told that PKK supporters are terrorists.

Some European countries render social and political support to PKK supporters, sanctioning their rallies against Turkey. USA indirectly arms them.

Turkey side insistently asks its strategic ally – USA not to supply arms to YPG and PYD.

Official Washington, claiming that these branches of PKK in Syria fight against ISIS, continuously supplies to them weapons and munition.

US even intends to supply air defense weapons and equipment to YPG and PYD.

There is no guaranty that these weapons won’t be transferred to PKK. Who and how supplied to terrorists more than 300 kg explosive used in last terrorist attack? Without any doubt, they get support from abroad.

But it is also worth to note that security service and police must also be kept responsible for overlooking those explosives’ delivery to Istanbul.

According to information, Turkey didn’t get positive reaction from 20 countries of European Union, excluding Germany, to extradite 263 terrorists, during 2007-2016. German government hasn’t yet handed out 136 PKK members demanded by official Ankara.

Some sources say PKK’s European affiliates annually donate EUR 30 million for the organization. One part of these funds are used by PKK supporters in Europe, the other - bigger part is sent to terrorists.

This terrorist group also expands at the expense of ISIS. Thus, 260 militants of ISIS joined PYD and YPG last month with ceremony held in Manbij.

Notably, although US military spokesmen stated that YPG and PYD have left Manbij, they are still in that territory.

According to report, US, Russia and Germany are top three exporters of weapons. 8 of top 10 weapon trade companies are located in United States.

Middle East, including Iraq and Syria is one of main fields for weapons trade. Without any doubt, one of the reasons of long-lasting conflicts in these countries is interests of main players of arms market.

Those forces are also keen to sell more weapons to Turkey.

Iraqi forces participate in fights to liberate Mosul together with coalition forces since October 17. Although some settlements of this province have already been cleared of terrorists, Mosul is still controlled by ISIS. In this conjuncture, fights against ISIS in Syria and Iraq resemble bloody show.

Furthermore, they have reportedly taken control over Syrian city Palmira.

Thus, without any doubt, Istanbul bombings has three legs: conflicts in neighboring countries, terrorists sheltered by European countries and interests of main players of arms market. They try to force Turkey to undermine its interests and cede part of its territories to someone else. When Turkey tries to thwart the game, they organize terrorist attacks and try to stimulate chaos. At the same time, they damage Turkey’s image in terms of internal stability. They try to present Turkey as country with high risk and ruin its economy.