Expert: Outline for US-Russian-Iranian cooperation in fight against the IS reveals - OPINION

Expert: Outline for US-Russian-Iranian cooperation in fight against the IS reveals - OPINION Andrey Kazantsev: The U.S. change its position on Bashar al-Assad not the first time, and there is nothing unusual here 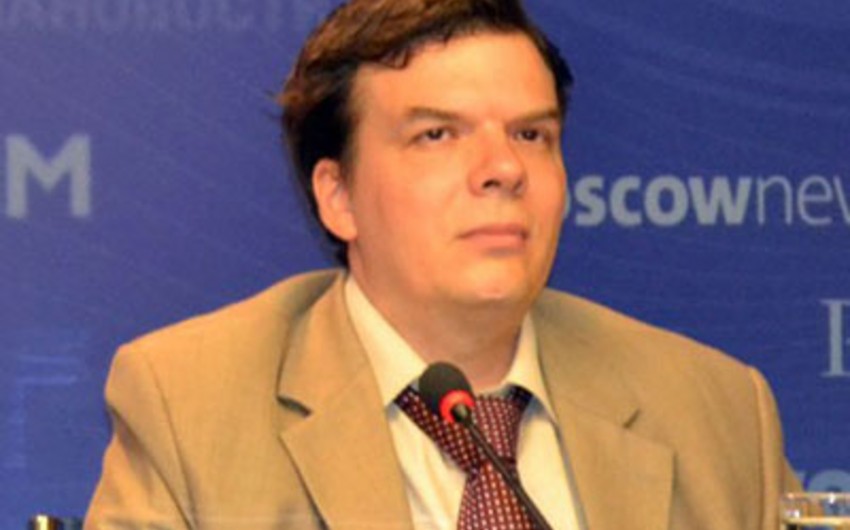 Baku. 1 October. REPORT.AZ/ "The U.S. change its position on Bashar Assad because of the recent Russian intervention on the side of Assad and Iran's active participation in the fight against the IS", Report was told by the political analyst Andrei Kazantsev.

"Now the United States has already agreed to Assad remained for some time. US changed position on Assad for three reasons. First - the recent strengthening of Russia's intervention in the Syrian conflict on the side of Assad. The second - the active participation of Iran in the struggle against the IG in Syria since and in Iraq, "- said the director of the Analytical Center of the Institute of International Studies, MGIMO, Doctor of Political Sciences Andrei Kazantsev, commenting on the change of the US position against Syrian President Bashar al-Assad.

As a third reason, he called a catastrophic situation with the preparation of the American soldiers to LIH.

"It all turned out to be a disaster for the US" security forces. "There was a huge program of training fighters in Syria against the IS. To spend a lot of money, almost anyone not prepared and who prepared - they began to pass over to the IS", said the expert.

A.Kazantsev pointed out that, the United States change its position on Bashar al-Assad not the first time, and there is nothing unusual here.

"Similarly, Obama changed his attitude toward the situation with chemical weapons in Syria. Let me remind you that, at that time it was all about direct US intervention on the side of the opposition fighting against Assad. Then it did not happen under the influence of two factors. One is well known to all who included in the Russian information field - this is the position of Russia and Putin personally. The other, perhaps even more important reason - it is less public pressure on Obama as US law enforcement agencies", said A.Kazantsev.

According to him, US security officials have seen not as the Western press, and realized that in Syria, in addition to the internal components of the civil war, is a war bloc led by Saudi Arabia and Iran.

"And they do not really understand, other US should so" bend "to the interests of Saudi Arabia and a number of views of Western partners, adjusted for ideological reasons sharply against Assad, such as France.

Strategic disadvantage of such a "deflection" by Saudi Arabia is that Americans are struggling with the Iranian unit, thereby de facto strengthen the position of his recent enemy - al-Qaeda, about which in the hype about Assad and IS everything is forgotten. Meanwhile, let's say, "Al-Nusra", a division of Al-Qaeda in Syria, there is also captured a decent area, and against the West is not fighting, the forces are simply not enough. By the way, is a "secondary" behavior of the United States, primarily in relation to the US European allies in NATO and the situation in Libya and the situation in Syria, and, often, even in the Ukraine, it is time, then, for what Republicans have criticized Obama during the current election campaign", said the analyst.

Speaking about the reasons for the sudden change in the US position, the head of the center said that it affected match by the time all three of these reasons - the position of Russia, Iran and the failure of the preparation of the fighters against the IS.

"Obama administration has no such really strong interests in Syria, she understands what's going on chaos, and, because she is looking for the simplest and most favorable solutions, which would allow to minimize the US costs and sacrifices to resolve the issue with the IS", said the expert.

Speaking about the impact of such participation of Russia in the Syrian issue, the candidate of political sciences pointed out that, first of all, become more defined contours of the future of Russian-American and even the US-Russian-Iranian cooperation in the fight against the IS.

"That's to say, cooperation, or, at least, some kind of interaction is possible between ideological enemies - as, for example, the Soviet Union, on the one hand, the United States and the British Empire, on the other hand, against the countries of the" axis "- if they have common enemies or interests. Details of the functioning of the coalition still be worked out. Russia will create a parallel US-based format of the Russian-Iranian-Syrian-Iraqi center in Baghdad", summed up A.Kazantsev.