Anna Hakopyan's adventure - show of 'peacefulness' in occupied Karabakh - COMMENT Baku. 9 October. REPORT.AZ/ The political forces that came to power in Armenia as a result of a coup are trying to form their image, gain points and win the love of the world and their own people by using the Azerbaijani territories. 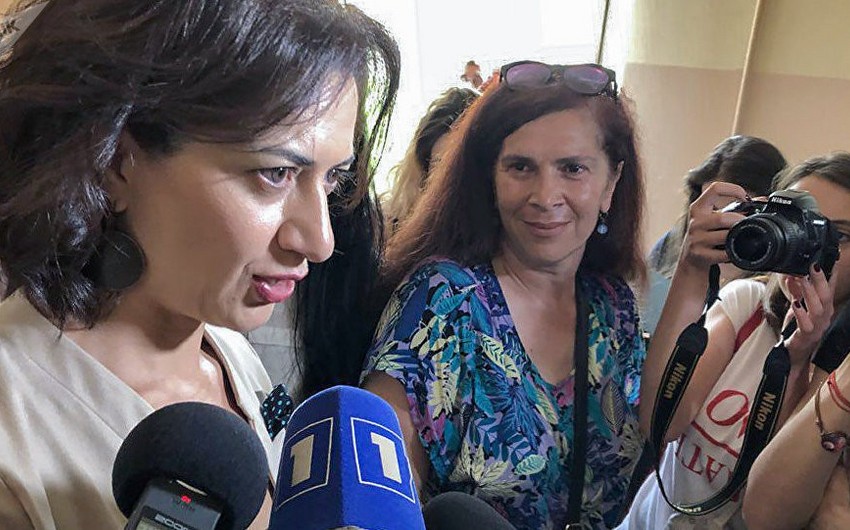 Baku. 9 October. REPORT.AZ/ The political forces that came to power in Armenia as a result of a coup are trying to form their image, gain points and win the love of the world and their own people by using the Azerbaijani territories.

While speaking about the peace settlement of the conflict through negotiations, Armenia's Prime Minister pays illegal visits to occupied Nagorno-Karabakh.

He and his spouse Anna Hakopyan try to play a 'peaceloving' role to mislead the international community. However, by using the occupied territories of the neighbor state for their own purposes they expose their true nature. As the scenario of the show is based on lies, by this role they harm themselves and are unable to conceal the invader image of Armenia.

Unfortunately, the citizens of Russia, one of the co-chairs of the OSCE Minsk Group, also join this adventure of Armenia's ruling family.

The participation of Russian citizens - founder of the 'Vera' (Faith) International Charity Foundation Anna Federmesser, writer Lyudmila Ulitskaya, chairman of the Women's Dialogue party Yelena Semerikova and chairman of the International Relations Committee of the Russian State Duma Svetlana Jurova and others in the visit to the occupied territories of Azerbaijan at the initiative of Armenia's Prime Minister Nikol Pashinyan and his spouse Anna Hakopyan on October 7 causes regret and disappointment.

By the way, Konstantin Zatulin, deputy chairman of the Russian State Duma Commission on CIS issues, Eurasian integration and work with compatriots, member of the ruling Yedinaya Rossiya faction is one of those who try to undermine the Azerbaijan-Russian relations and support separatism by joining Armenia's adventure and is also famous for his rough statements against Azerbaijan. He supports the occupational policy of Armenia and Armenian separatism.

Such Duma representatives as Zatulin and Jurova are concerned about the comprehensive development of relations between Azerbaijan and Russia and unsuccessfully try to undermine these relations under the influence of the Armenian lobby.

All normally thinking people of the world are peaceloving. For them, peacebuilding is not only beautiful words and attractive mottos. From this point of view, when speaking about peace it is primarily necessary to take into account the feelings, pain, interests and rights of the opposite side. However, if the Armenian Prime Minister's wife and the supporters of her adventure aim to continue the occupation of Azerbaijani territories under pretense of peacelovingness, then they are seriously mistaken.

How can one visit an occupied land, forcefully violating the internationally recognized territorial integrity and sovereignty of another country, and speak about peace and humanistic values there? What a strange logic? For those who perpetrated the genocide in Khojaly and Agdaban in the occupied territories of Azerbaijan, killed innocent people, shed the blood of unborn babies, children, elderly people and women, it is ridiculous to speak about peace and humanism on the occupied soil, because the perpetrators of those crimes have not been held responsible for them and occupation still continues.

Probably, those who visit Nagorno-Karabakh and speak about peace there never change countenance.

Such a propaganda under pretense of peacebuilding can never be considered correct in any sense. By such absurd initiatives those who take these steps deal a blow to such goodwill activities as peacebuilding and peacelovingness. It is ridiculous to add those who support turning the citizens of a neighbor state into persons displaced from their own lands to the list of the carriers and supporters of such initiatives.

It is well known to everyone that Azerbaijan suffered most in the Nagorno-Karabakh conflict. Azerbaijani territories have been held under Armenian occupation for already more than 25 years. Peacebuilding must start from the Armenian society which must realize the need for the withdrawal of Armenian armed forces from the occupied territories of Azerbaijan.

Anna Hakopyan and the supporters of her adventure try to oppose this peaceloving stance. In this respect, the unprofessional form of their 'peacebuilding' activity has a negative impact on the process in general and further geopardizes the situation.

By acting this way Anna Hakopyan opposed her husband Nikol Pashinyan. Thus, at the time when Armenia and Azerbaijan discuss issues related to the strengthening of the ceasefire regime, such steps do not serve the resolution of the conflict through peaceful means. On the contrary, they create a negative information medium and again cast shadow on the image of official Yerevan.

Nagorno-Karabakh and surrounding regions are an integral part of Azerbaijan. All UN member-states, including the OSCE Minsk Group co-chairs - the United States, France and Russia, mediating the conflict settlement, recognize the independence of Azerbaijan together with those territories. Therefore, the illegal visits to the occupied territories of Azerbaijan are nothing but rude violation of our country's territorial integrity and sovereignty, as well as respective laws. The names of the persons who took part in these illegal visits will be blacklisted by the respective state bodies.

However, there are those who regret their actions and apologize to Azerbaijan. Let's remember some of them.

The name of Russia's famous politician, one of the leaders of the Russian Liberal Democrat Party Alexey Mitrofanov was removed from the list after he apologized.

Russian citizen, member of the project 'Music for peace', musician Dmitriy Uvarov addressed a letter to the Foreign Ministry with a request to remove his name from the 'List of foreigners paid illegal visits to the occupied territories of the Azerbaijan Republic'.

In his letter he said that he visited Nagorno-Karabakh as part of the project 'Music for peace' in 2015 being unaware that the visit to those areas without Azerbaijan's permission is prohibited. He noted in the letter that his visit was by no way a sign of disrespect to the Azerbaijan Republic and people.

Stressing respect to the laws of the Republic of Azerbaijan, Dmitriy Uvarov apologized to the government and people of Azerbaijan for visiting the occupied lands.

He noted that over a million of Azerbaijanis were turned into refugees and displaced persons and over 20,000 people died as a result of the conflict. Uvarov visited Baku and stressed his intention to hold a charity concert for Azerbaijani refugees in the liberated Jojuq Marjanli village as part of the project 'Music for peace'.

Citizen of Russia and Israel, blogger Alexander Lapshin who was arrested in Belarus capital Minsk and delivered to Baku at Azerbaijan's request in 2017, also apologized to President Ilham Aliyev, Azerbaijani people and state.

Notably, Lapshin was arrested in Belarus at Azerbaijan's request on December 14. A citizen of several countries, in April 2011 and October 2012 he colluded with other persons, residing the occupied lands of Azerbaijan, trespassed the protected borders of the Republic of Azerbaijan and crossed to the occupied lands bypassing the border checkpoints in the absence of respective documents in contravention to the laws of the Republic of Azerbaijan 'On the state border of the Azerbaijan Republic' and 'On passports'. By indicating Nagorno-Karabakh as an 'independent state' along with Azerbaijan and Armenia among the countries he travelled to on social networks in order to promote the illegal regime on the international arena and by supporting the 'independence' of the illegally functioning regime in the occupied lands in his statements dated April 6 and June 29, 2016, he made opens calls aimed at undermining the internationally recognized territorial integrity of Azerbaijan.

The citizen of the United Arab Emirates, Ibrahim Ahmad Mohammad Abdullah addressed a letter to Azerbaijan's Foreign Ministry and asked to remove his name from the list of undesirable persons.

He said that he visited Nagorno-Karabakh in 2017 and did not have any idea of the implications his visit might have. The UAE citizen said that his visit is by no way a sign of disrespect to the Republic of Azerbaijan and its people,

Expressing his respect to Azerbaijan's territorial integrity within the internationally recognized borders, country's sovereignty and laws, he apologized to the Azerbaijani government and people for the visit.

There are many people who understood their mistakes and apologized. It indicates that even in Baku it is possible to explain the reality to those in the face of Lapshin who show disrespect to Azerbaijan and make mistake. However, being committed to the principles of peacelovingness and humanism, Azerbaijan hopes that they will understand their lawless actions.

Therefore, it is not ruled out that those who support the false claims of the Armenian state and have joined Anna Hakopyan's adventure under pretense of peacelovingness will undertstand their mistake sooner or later.