Alliance that began in Baku and continued in Karabakh - Shusha Declaration

Alliance that began in Baku and continued in Karabakh - Shusha Declaration September 15 is one of the greatest days in the history of Azerbaijan and Turkey. As it is now, "one nation, two states" asserted itself 103 years ago. The brotherly Ottoman state aided the newly established Azerbaijan Democratic Republic. 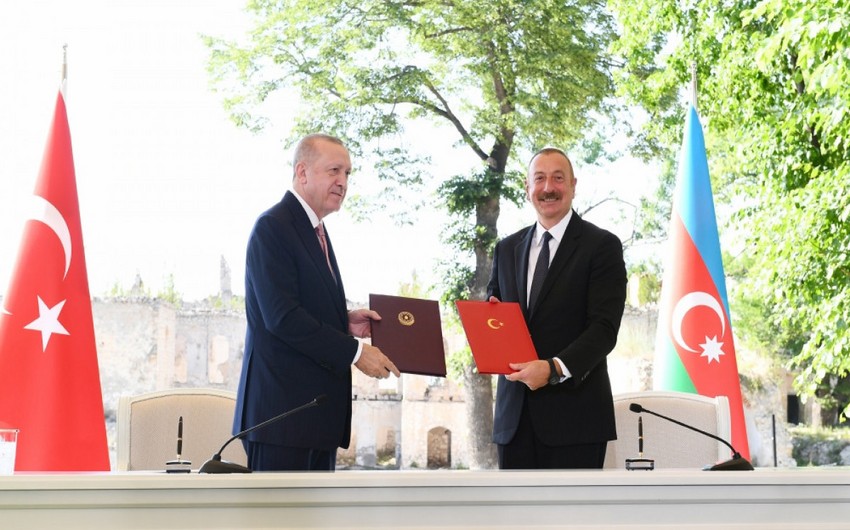 September 15 is one of the greatest days in the history of Azerbaijan and Turkey. As it is now, "one nation, two states" proved itself 103 years ago. The brotherly Ottoman state helped the newly established Azerbaijan Democratic Republic.

So, although the Azerbaijan Democratic Republic was proclaimed on May 28, 1918, the construction of this nation-state began mainly after September 15. From August 26 to September 14, 1918, the Caucasus Islamic Army, consisting of the Ottoman and Azerbaijani Democratic Republic forces led by Nuri Pasha, fought for Baku against the Bolshevik-Dashnak-Baku Soviet forces. Later, British, Armenian, and Russian forces joined the battle, which was the last battle of the Caucasus Campaign. As a result, Baku was liberated from the Bolshevik-Dashnak-Baku Soviet and the Central Caspian Dictatorship. After that, Baku was declared the capital of the Azerbaijan Democratic Republic. However, the tension did not end with the battle of Baku, and the events continued with the Armenian-Azerbaijani war. In fact, the war of aggression launched by Armenia and its supporters against Azerbaijan 103 years ago continued after the collapse of the USSR. The lands of the republic were under their occupation for about 30 years. The war that began on September 27, 2020, and lasted after 44 days ended the occupation. Armenia signed a statement of capitulation on November 10. During this period, the support of Turkey and other allies to Azerbaijan's just cause and just war was similar to the events of 102 years ago. The main enemies of the Ottoman Empire and the Azerbaijan Democratic Republic remained the same. Those who played a leading role in this hostility were continuing their usual activities. Armenia, the Armenian lobby, and its supporters have been making noise for more than 100 years. The Second Karabakh War radically changed the text they had memorized. Those who lost to the Ottomans and the Azerbaijan Democratic Republic in the Battle of Baku 102 years ago were again defeated on November 10, 2020 in the Karabakh region and surrounding districts of Azerbaijan. Armenia's capitulation was also a response by Azerbaijan and Turkey to its supporters. This union has proved to the world that peace, stability, and security in the region are undermined by Armenia and its supporters. 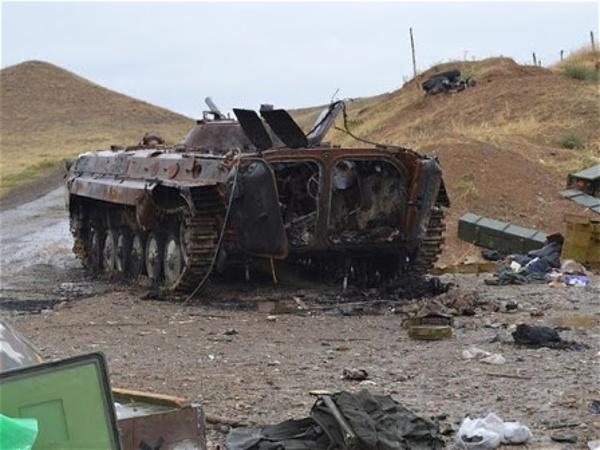 By the way, on September 15, 2018, for the first time, Baku celebrated the victory of the Caucasus Islamic Army and the Azerbaijani National Army. On the same day, the "One nation, two states" slogan, the inviolability and eternity of the Azerbaijani-Turkish unity and brotherhood were once again proved. A parade dedicated to the 100th anniversary of the liberation of Baku was held on Azadliq Square (Freedom Square) in the Azerbaijani capital. The ceremony was attended by President of the Republic of Azerbaijan Ilham Aliyev, President of the Republic of Turkey Recep Tayyip Erdogan, and First Lady of Azerbaijan Mehriban Aliyeva.

President of Azerbaijan, Supreme Commander-in-Chief of the Armed Forces Ilham Aliyev, addressed the parade: " Dear friends, it is a historic day in the full sense of the word today. It is a day of Turkish-Azerbaijani unity and Turkish-Azerbaijani brotherhood. We, representatives of this generation, are perpetuating and will perpetuate this day. The whole world sees today that Turkey and Azerbaijan are together. The whole world sees that our indestructible friendship and brotherhood are eternal. A hundred years ago, as a result of a joint operation of the Caucasian Islamic Army and the Azerbaijani National Army, Baku was liberated from occupation. Our ancestors showed true heroism and selflessness in the fierce fight that lasted more than a day. I must also note that two days after this historic victory, the Azerbaijani government moved from Ganja to Baku, and Baku was declared the capital of the Azerbaijani state. Our ancient city, the ancient city of the Azerbaijani people Baku was returned to its true owners. The heroism, friendship, and brotherhood of Nuru Pasha, the Caucasian Islamic Army, and our brothers are unforgettable, eternal, and will always live in our hearts forever” 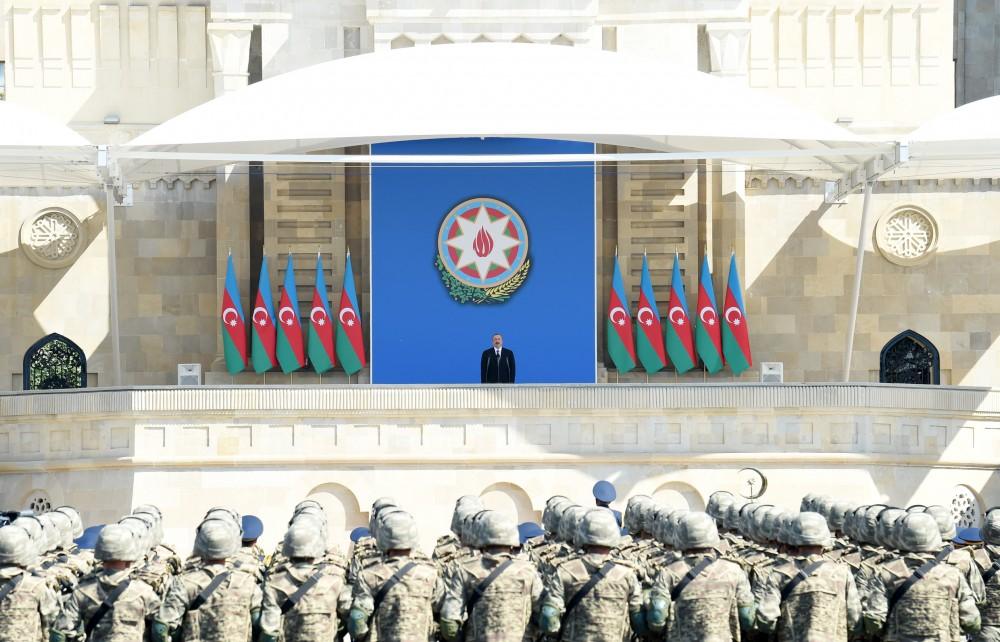 As in other events, in his speech at the parade, the head of state stressed that relations had improved between the two countries in economic, cultural, transport, energy, and other fields. Ilham Aliyev expressed confidence that the then-occupied Azerbaijani lands would be liberated: " Nagorno-Karabakh is ancestral Azerbaijani land. The Azerbaijani people have lived and worked on this land for centuries. Our contemptible neighbors took advantage of the unstable situation in Azerbaijan in the early 1990s and occupied a part of our lands. All our historical and religious monuments on the occupied territories have been mercilessly destroyed. Genocide has been committed against our people and this occupation still continues. Therefore, a strong army is the main prerequisite for the existence of Azerbaijan in the future as an independent country and for the restoration of its territorial integrity. The Azerbaijani army showed its strength and ability on the battlefield. The Azerbaijani flags that have been in battles will be brought to Azadlig Square today. These flags were raised by Azerbaijani fighters in the territories Agdara, Fuzuli and Jabrayil districts liberated from occupation in 2016. These flags were raised on the lands liberated from occupation as a result of a successful operation on the Nakhchivan section of the Armenian-Azerbaijani border in May this year. One day the national flag of Azerbaijan will be raised on all the lands that are currently under occupation.” Thus, the president noted that Azerbaijani-Turkish relations were at a high level at all times. 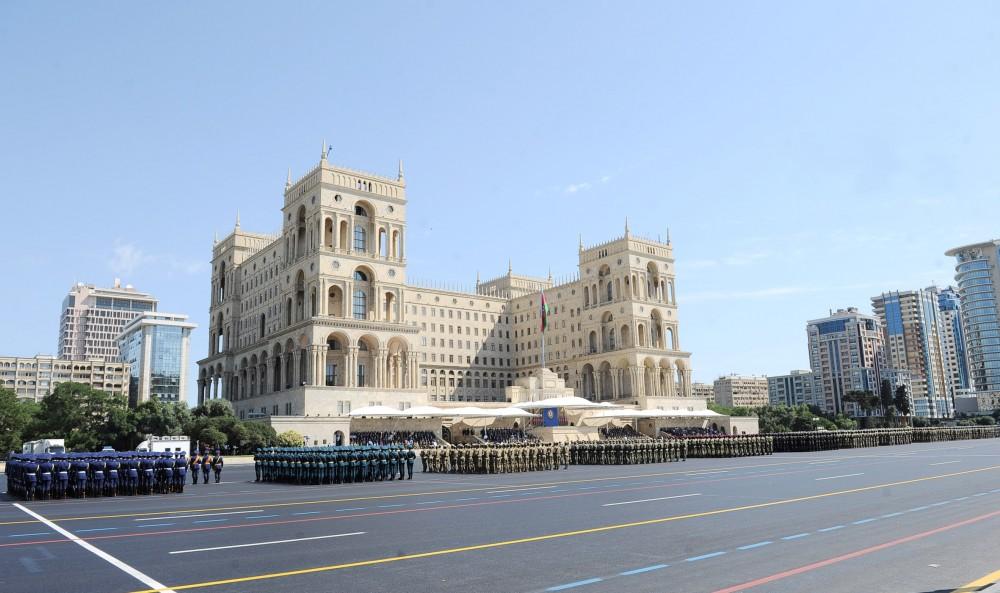 In his speech, Turkish President Recep Tayyip Erdogan also spoke about the unity of the two countries, the inviolability of relations, and the historical significance of Baku's liberation. Here are some points from that speech: "We are a country with 78 martyrs' cemeteries in 34 countries around the world. Turkey gave 1,132 martyrs for Azerbaijan. Azerbaijan is the country where the Turkish soldiers were the most martyred after Turkey. Those sleeping side by side in the graves here are our martyrs, as well as representatives of the common destiny between our countries. Today we don't only celebrate the 100th anniversary of Baku's liberation from the occupation by the Caucasus Islamic Army and our Azerbaijani brothers, but also perceive the blood brotherhood that we symbolize as "One Nation, Two States" entrusted to us by our dear martyrs. The war that took place on September 15, 1918, in the area where we live today was not an ordinary event. The struggle waged here a century ago is also a symbol of our brotherhood, friendship, unity, and equality. Without the knowledge of history and perceiving the reasons why Nuru Pasha and his soldiers came to Baku and Ganja thousands of kilometers away a century ago, we cannot understand the meaning of this scene of solidarity in Azadlig Square. The sad story of the famous Azerbaijani song 'Laleler' (Poppies) is also an expression of the suffered torments, and joyfulness brought by the Caucasus Islamic Army to the hearts. My dear brothers and sisters, we know that today some forces are trying to make the great victory of September 15, 1918, seem small and insignificant. Those who initiated it are those who still cannot forget the shame of the heavy defeat they suffered at that time. The operations carried out by the Caucasus Islamic Army and the Azerbaijani Army here in 1918 ensured the territorial integrity of Azerbaijan at that time and laid the foundation of today's independence. It is no coincidence that the first country to recognize Azerbaijan after regaining its independence in 1991 was the Republic of Turkey. It is a natural consequence of our blood brotherhood. As Turkey, we have provided all possible support to Azerbaijan since the early days of independence and will continue to do so.” 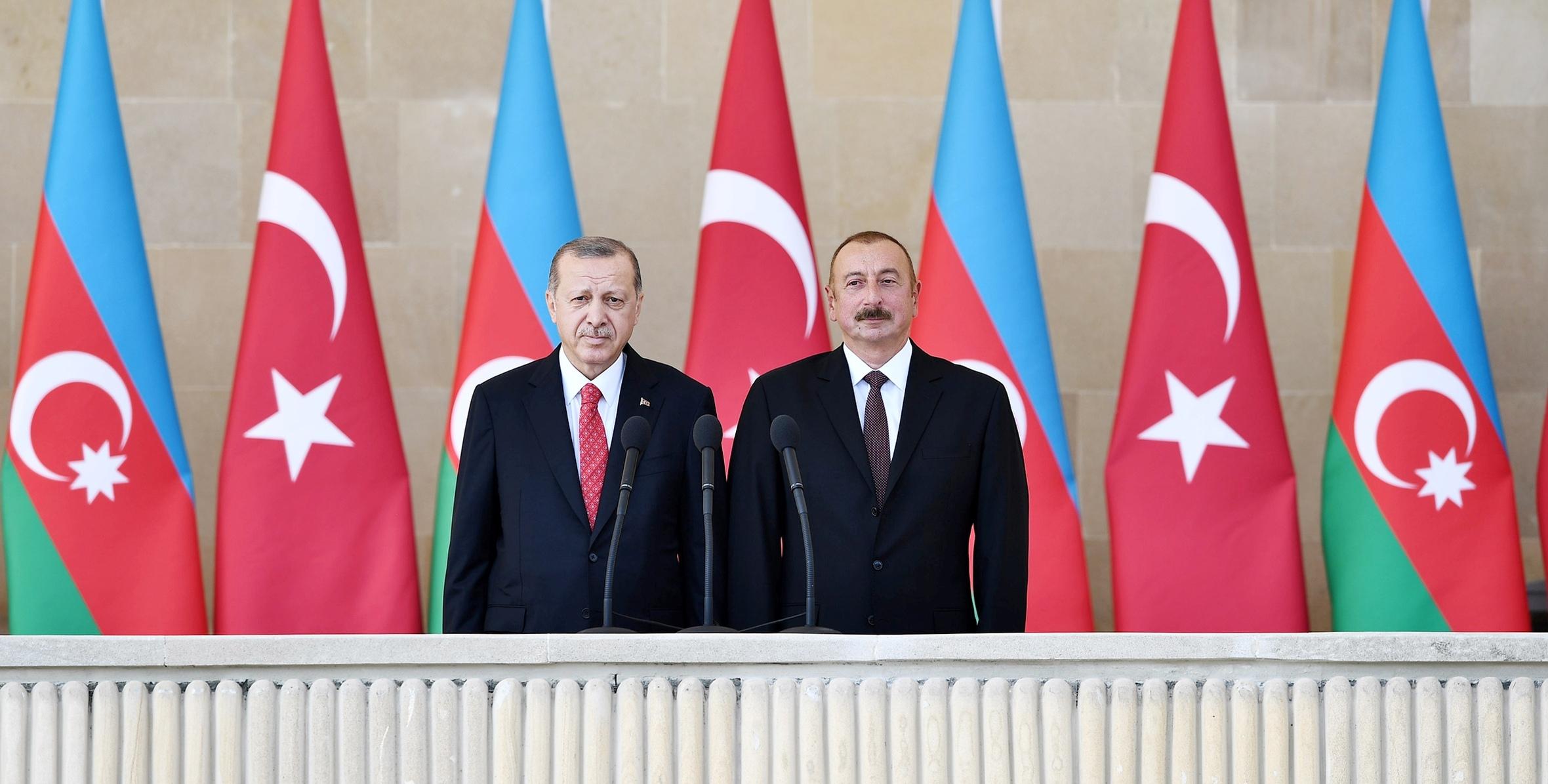 The Turkish leader's statement was reaffirmed in the Second Karabakh War. Recep Tayyip Erdogan had told the whole world that he would stand by Azerbaijan in the liberation of the occupied territories. It is no secret that in the battles for the liberation of the territories from the occupation of Armenia and its supporters, Turkey has provided historical support to Azerbaijan in all directions. The country's media also smashed the false propaganda of Armenia and its supporters by informing Turkey and the world community about Azerbaijan's just cause. The training of Azerbaijani service members in Turkey and joint military maneuvers of the Armed Forces of the two countries also played an invaluable role in winning the battles. Victory Parade on Azadlig Square in Baku on December 10, 2020, participation of Turkish soldiers and officers in the Victory Parade, military support of the brotherly country to Azerbaijan in the Patriotic War, President Ilham Aliyev's reception of President Recep Tayyip Erdogan as an honorary guest are symbols of the brotherhood. First Lady of Azerbaijan Mehriban Aliyeva and First Lady of Turkey Emine Erdogan also took part in the Victory Parade. 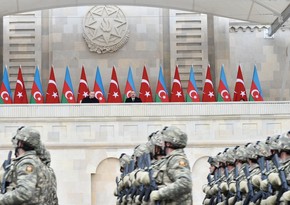 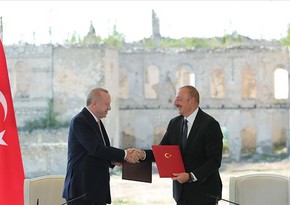 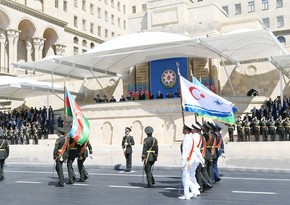 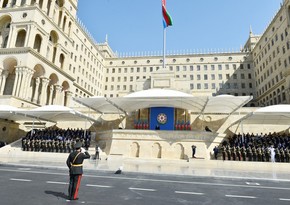 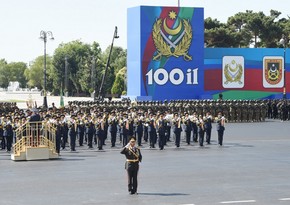 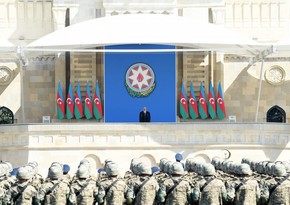 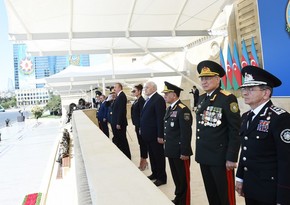 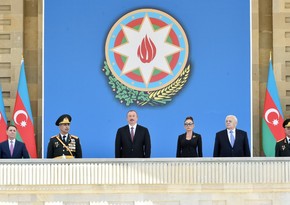 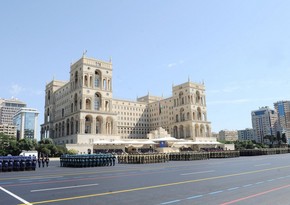 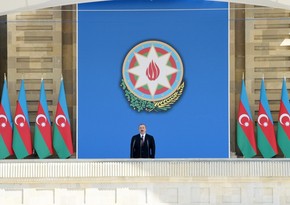 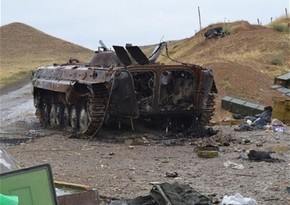 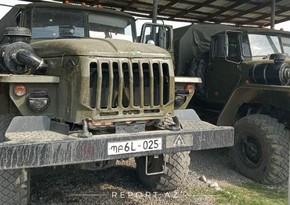